After Nearly 40 Years of Driving, I Unfortunately Strike a Living Animal 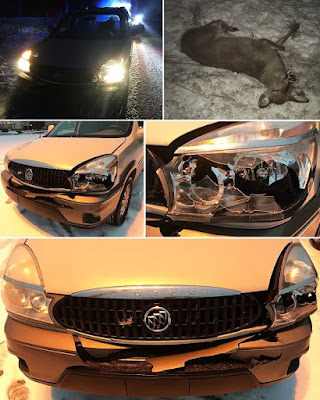 I've been driving for nearly 40 years and in that time I've likely logged nearly a half a million miles on the road. About 90 percent of those miles have been driven in the states of Alaska and Montana, where I've resided for most of my adult life and successfully avoided impacts with deer, moose, elk and other wildlife. I'm fortunate to have an impeccable driving record, and I had never struck a living thing with a vehicle -- until yesterday. That was the day when I would strike and kill a deer on an Indiana highway while going to work.

I've resided in Indiana for four years and the road on which I struck the deer is one that I've driven on every day for 3 1/2 years. I've seen a lot of deer on and near that road, and this year there has been an increase in deer wandering since we didn't get our first winter snowfall here in north central Indiana until just last week. It was 7:15 a.m. and I was about 4 miles from my home on a slick, somewhat foggy, dark morning commute with a mixture of sleet and snow falling at 30 degrees. I was in a 55 m.p.h. zone and the responding officer estimated my speed at 45 m.p.h. based on my tracks and the location of the deer in proximity to my vehicle -- the deer being only about 30 yards behind my car on the edge of the road.

It was a two-lane road between a harvested corn field and a railroad track. I had my low beams on because there was another car approaching me about one-third of a mile ahead. My wipers were intermittent and I had no vehicles behind me. Suddenly, a deer entered the roadway about 50 feet or so in front of my vehicle at a full sprint -- and deer can run 30 miles per hour. The responding officer said that the deer may have been spooked or was being chased, perhaps by a coyote. The deer was darting directly across the road, coming into the road from my driver's side, and directly in front of my vehicle. I was covering about 65 feet per second at 45 miles per hour and the deer entered the road about 20 yards in front of me, which gave me less than a second to respond. I took my foot off the gas pedal, gripped the steering wheel firmly, and struck it directly on the front of my car. You never want to swerve to try and miss a deer with such little time to respond. Suffice it to say, the pictures accompanying this blog post tell the story. The deer died instantly and I was fortunate not to have it fly up and into/through my windshield. I now am driving a rental car provided by my insurance company until my vehicle is repaired.

A recent All State insurance study shows that there are 14,000 deer/vehicle collisions annually in Indiana. Indiana drivers have a 1 in 145 chance of striking a deer and Indiana ranks 27th in the nation of most likely states to have a collision with a deer. After nearly four decades of driving, yesterday was my day to experience an unavoidable collision with a deer. At least I walked away unharmed. Sadly, about 150 people die each year in America from hitting a deer with their vehicle.

So, what's the extent of damage to my vehicle? About $4,000 of repairs needed. The deer impact not only damaged the outside of my vehicle, but also pushed the radiator back, which in turn damaged the air conditioning unit. I should have the repaired vehicle back by the end of the month.