Some Say Chivalry Is Dead. I Don't Agree, But It Needs Strengthening! 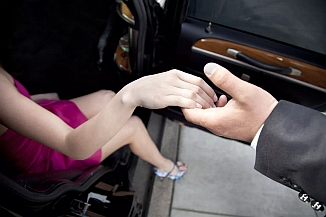 The other night at dinner, my wife, step-daughters (ages 10 and 13) and I got into a discussion about old-fashioned values and chivalry. Both of my step-daughters appreciate the fact that I not only open the car door for their mother, but I do it for them as well. All of them appreciate that I walk side by side with them and don't stride ahead -- leading the way out of reach. I pay for date nights, wash dishes, vacuum, and help with grocery shopping. They appreciate that I'll do the messy and very strenuous jobs around the house, like shoveling snow off of the driveway, cleaning the gutters, or taking out the trash. However, they also know that I am a fading breed and that old-fashioned values and chivalry seem to be nearly non-existent.


Chivalry is Dead! At one time, men were allowed to express the way they honored women by doing chivalrous acts such as: opening the door for a woman, pulling out her chair, paying for dinner, and other acts. It no longer lives as these things are offensive to women in the wake of feminism due to the myth of male power, otherwise known as the 'patriarchy.' Men now are floundering in society as they cannot express any genuine acts of true masculinity because it has been branded as 'toxic' and 'oppressive.'

What a sad commentary about the state of chivalry in our world today! Suzanne Venker is a writer who has contributed to CNN, ABC, Fox News, and other outlets. Last year she wrote a piece titled "Chivalry is dead because women killed it." It is worth your time to read that writing. Ms. Venker has written extensively about marriage and the family and its intersection with the culture. She is also the founder of Women for Men, a news and opinion website committed to improving gender relations and to providing support for men. Rather than restate what Ms. Venker so eloquently wrote in her writing I've linked above, I'm going to share some thoughts about my own position on old-fashioned values and chivalry.

I was born in 1965 and grew up watching my father treat my mother as a true gentleman should. Chivalry definitely shined through his acts and words, and I not only observed that through my father's example, but also through the example of other men in the 1970's. During that decade I watched such television programs as Mister Rogers' Neighborhood, The Andy Griffith Show, Mayberry R.F.D., Little House on the Prairie, and The Waltons. Men in these programs regularly talked about and displayed old-fashioned values and chivalry. From a young age I was exposed to examples of how a man should treat a woman and what it means to be a gentleman. That seems to be lacking in our world today.

The dating website, Match.com, did a survey of today's single women and asked if they believe that chivalry is dead. Sadly, 73 percent responded that chivalry is indeed dead. When asked what kinds of "chivalrous acts" they would like to see modern men do, single women listed many things -- and here are just a few:
Of course, modern technology appears to be at the center of what today's women consider to be 'chivalrous acts.' Paying for dinner, opening a door for her, pulling out her chair, assisting with her coat, and similar acts don't appear to be very important. As the recent match.com survey summarized, "we’d like men to realize that most of us mastered basic motor skills by the age five." Ouch! Overall, 45 percent of the women surveyed said that men were out of touch with modern dating.

I'm so happy to be married to a beautiful, sweet and loving woman who appreciates my old-fashioned values, my gentleman approach, and my acts of chivalry. Sure, I've received some strange looks from guys in the supermarket parking lot when I open the car door for my wife, but I've also received looks from women who are clearly envious of my wife. I believe that in their heart, most women want an old-fashioned man who can be a gentleman. That doesn't mean that those women are weak. It means that they appreciate their man holding them in esteem and wanting to care for and protect them.

Men, look at your wife, girlfriend and/or partner and try just one way this week to be a true gentleman. If you haven't been opening car doors for her, give it a try! Chances are, she will be rather surprised and -- barring a modern-day feminist response -- she may truly appreciate it in her heart (even if she says nothing) and it may be a simple step toward strengthening your relationship. Chivalry isn't completely dead, but it does need to be taught through words and consistent acts. Chivalry, in a nutshell, is courtesy and honor. Certainly we men can show that to the women we want by our side.

Email ThisBlogThis!Share to TwitterShare to FacebookShare to Pinterest
Labels: Be Chivalrous, Being a Gentleman, Bring Back Chivalry, Chivalrous Acts, Chivalry is Not Dead, Chivalry Survey, Do Women Want Chivalry, How to be a Gentleman, Is Chivalry Dead, Old-fashioned Values
Newer Post Older Post Home