Are Those Colorful Peanut M&M's A "Healthy" Snack? 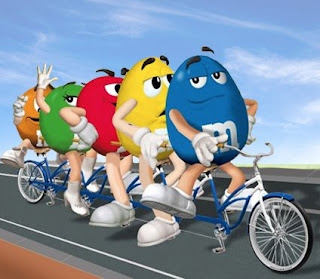 Those who know me are well aware that I like Peanut M&M's. In fact, when I was running across America alone in 2006, a woman in Indiana gave me a 5-pound bag of M&M's. That's a lot of M&M's! Of course I wasn't able to push that much candy on my support stroller, but I did take some of them 'for the road'.

A question that may be debated until the end of time is: Can Peanut M&M's be considered a "healthy" snack?

I've done a little reading on the topic and it turns out that Peanut M&Ms are surprisingly healthy. They have more protein, fiber, and healthy unsaturated fats than other nut-and-chocolate options, including Snickers, Baby Ruths, and the extremely caloric Reese's Peanut Butter Cups. Ideally, the protein and fiber in Peanut M&Ms will help keep you full and prevent you from reaching for more candy later. They're also lower on the glycemic index, meaning they won't cause your blood sugar to soar like most other candy.

Peanut M&Ms are low in cholesterol and sodium, which can easily drive up your weight when consumed in excess. The only thing to keep in mind is the calorie and sugar count. If you’re worried about your sugar intake, you may want to opt for a smaller serving of peanut M&Ms, as a full serving can contain 25 grams. Otherwise, peanut M&Ms can be a great snack to enjoy in moderation whenever you crave sweet chocolate and the crunch of candy and peanuts. 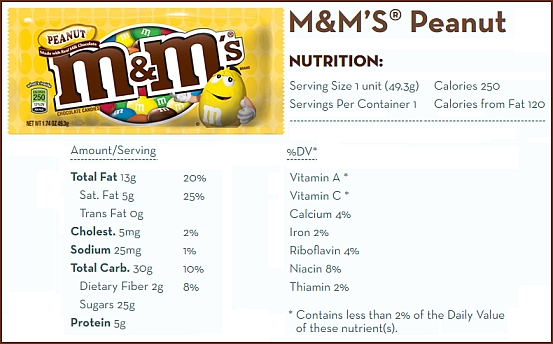 I also read something else about Peanut M&M's that I found interesting. The blue food dye found in M&Ms could be helpful in reducing damage caused by spine injuries, according to research published in the Proceedings of the National Academy of Sciences. Scientists at the University of Rochester Medical Center found that when they injected the compound Brilliant Blue G (BBG) into rats suffering spinal cord injuries, it sped up their recovery and ability to walk.

Finally, in case you're curious as to what the M's stand for in M&M's, an online website aimed at feeding your brain (called "Today I Found Out") states that in 1941 Forrest Mars Sr., of the Mars candy company, made a deal with Bruce Murrie, son of famed Hershey president William Murrie, to develop a hard shelled candy with chocolate at the center. The M&M's name thus stood for “Mars & Murrie” -- the co-creators of the candy.

You'll have to decide for yourself whether or not M&M's can be considered a "healthy" snack. My simple advice is don't go 'nuts' eating them!