Running Across The Mojave Desert All Alone 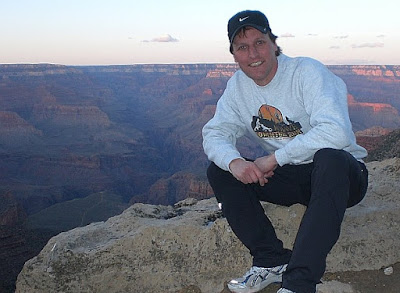 In April 2010, as I was doing a solo run across Germany and was caught in the worst spring snowstorm that Bavaria had seen in 30 years, I came up with the idea of attempting a solo run across the Mojave Desert. I had already run solo across America, Montana, Alaska and Germany... most of those runs involving a lot of mountains and a significant amount of chilly weather. So, the thought of running through a dry, desolate landscape for over 500 miles in less than 3 weeks sparked my adventurous spirit.

Immediately after completing the Germany run, I began planning the Mojave run -- to take place 10 months later. I had never spent any time in the Mojave Desert, but had run all alone across the Great Plains during the heat of the summer in 2006 and didn't anticipate the Mojave to be much different. Well, the Mojave Desert is indeed unique and poses some significant challenges. It is the driest of the North American deserts, receiving less than 13 inches of rain a year. Not only is the Mojave very hot, but it can also be very windy. At nighttime the desert floor comes alive with insects, snakes and spiders, so staying in my tent after sunset would be necessary. There are rattlesnakes, coyotes, tarantulas, lizards, turtles, scorpions, and a host of other living things. 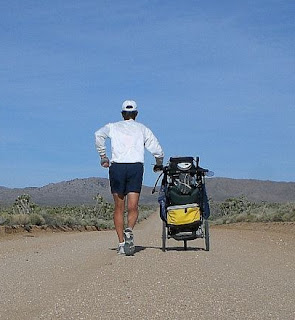 I began with deciding where I wanted to start the run. I chose the South Rim of the Grand Canyon in Arizona and would run a 506-mile course to Badwater Basin in Death Valley, California. Badwater Basin is the lowest point in North America, with an elevation of 282 feet BELOW sea level. I envisioned starting alone in the early morning looking into the depths of the Grand Canyon and ultimately finishing on the salt flats of Badwater Basin -- the location of the highest recorded temperature: 134 degrees! I chose to begin in mid-April and do the 506 miles in 17 days, averaging 30 miles per day. The highest temperature I would encounter would be 95 degrees.

To make the run "solo" I would have no support crew and would push all of my gear, food and water in a BOB Sport Utility Stroller, the same stroller I had pushed on my other adventure runs across states and countries. However, this time the stroller would be more of a rolling canteen, because I decided not to store water caches in the desert before beginning the journey -- contrary to the advice of other adventure runners who had contacted me before I started. I decided that I would restock my water supply where and when I could as I traversed the desert, carrying a water purifier to use, if needed. I had enough containers to carry up to 7 gallons of water -- which would weigh a total of 56 pounds. That, combined with the 20 pound weight of the stroller itself and the 23 pounds of weight for my tent, clothes, food, and electronics (used to update my online classroom for students) would bring the maximum weight of the stroller to nearly 100 pounds. I weighed 153 pounds at the time. 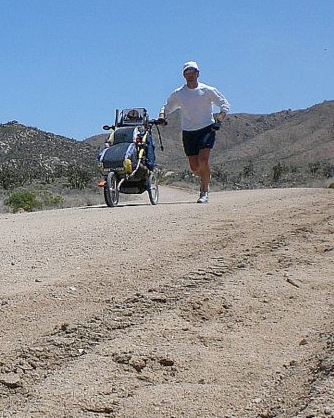 To push a 100-pound stroller through the desert for 30 miles per day on roads that are often very rough and sometimes sand covered can be extremely challenging. Near the beginning of the run I was able to stay in some small motels, but as the run progressed I had only my tent on the desert floor to sleep in. Night after night in the desert with no access to ice to help treat my aching legs at the end of the day was difficult. My water supply got so warm that drinking it was like drinking warm bath water. At one point I went over 100 miles before being able to replenish my water supply. My food was limited to what I could carry on the stroller... food that wouldn't spoil.

Late in the run I encountered 40 to 50 mph headwinds and could only accomplish 2 miles every hour while pushing the stroller. With ski goggles over my eyes and ear plugs in my ears, I pushed on through the blowing sand. In some places, I had to take apart the stroller and carry my items up a sandy sloped portion of "road" and re-assemble things in order to continue on -- the combined weight of the gear, food and water being too much to push collectively up the soft/shifting surface.

After experiencing some incredibly difficult days of running, I ran into Badwater Basin, Death Valley, and had completed the first solo run across the Mojave Desert with a start at the Grand Canyon. My footsteps touched Arizona, Nevada and California. I would then have to go through 2 months of physical therapy to treat a couple of herniated discs in my lower back due to the exertion required to accomplish the run. The adventure was an exhausting undertaking and I used a live satellite tracking device so that people around the world could watch my progress via the Internet. I had an "online classroom" for students so that they could virtually experience the adventure with me through my writings, pictures and videos. The run was one of the most physically demanding events I have ever done. 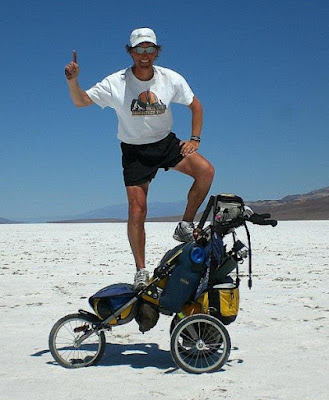 I look back on the Mojave adventure and see how fitting it was to finish at the lowest point of elevation in North America. You see, at the time I was at the lowest point in my personal life. Not long after the Mojave run, I would experience a divorce after 25 years of marriage and having less daily connection with my four children. It has been over 5 years since I crossed the finish line in the Mojave and three of my four children are now adults, with my youngest being 16 years old. Life moves on and I can tell you that the pain I experienced in the Mojave, and in the years immediately following, have made me stronger and given me a greater appreciation for this life I have.