The "Gold" In Olympic Gold Medals 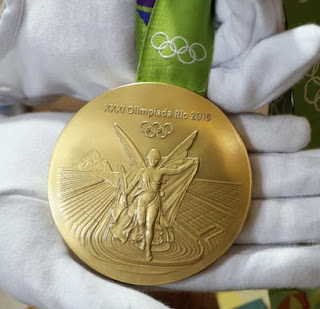 I've never seen an Olympic gold medal, and I'll never win one. However, I believe we all feel emotion when we watch an Olympic athlete on the podium with a gold medal around his or her neck as their National Anthem is being played. I recently read about Olympic gold medals and their creation, and I was a bit surprised at the details.

I'll jump right to the point -- there’s no such thing as a “gold” medal, at least not at the upcoming Rio Olympics. Second-place finishers get silver medals and oddly enough, so do the winners, albeit theirs are plated in a tiny amount of gold.

The medals to be given to champions at the 2016 Olympics will weigh just over a pound, so to make them entirely from gold would have cost about $23,500 in material, each! By taking the silver medals and then plating them in a tiny amount of Brazilian gold, the actual value of the metal inside of those medals is about $600.

The gold is certified to have a certain amount of purity and is considered very high quality. The silver and “bronze” medals are largely made from recycled materials. And by the way, the bronze medals are not really bronze, but are made in part from the same copper that goes into the Brazilian coin.

The last series of Olympic medals to be made of solid gold were awarded at the 1912 Olympic Games in Stockholm, Sweden. Olympic Gold medals are required to be made from at least 92.5% silver, and must contain a minimum of 6 grams of gold.