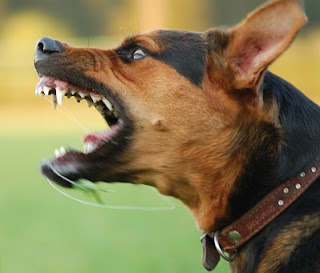 Imagine this scenario: You're out for a run on a beautiful day and are enjoying the minutes and miles as they click by. All of a sudden you see a dog running toward you with its teeth bared, clearly ready to bite you. You have nothing to protect yourself... no dog repeller, no whistle, nothing to throw. What should you do? The aim of this post is to give you some information to use in such a situation.

First, just how big is the problem of biting/attacking dogs? So far in 2016, there have been 19 dog attacks in the United States that have resulted in death. In 2015, there were 34 fatal dog attacks (14 children, 20 adults). Approximately 4.5 million dog bites occur each year in America. Nearly 1 out of 5 bites becomes infected. Dog bites and other dog-related injuries accounted for more than one-third of all homeowners insurance liability claim dollars paid out in 2015, costing more than $570 million. Dog bites occur every 75 seconds in the United States. Each day, over 1,000 citizens need emergency medical care to treat these injuries. In 2015, pit bulls contributed to 82% of the total recorded deaths, the highest fatality count on record for the breed. In 2015, the combination of pit bulls and rottweilers contributed to 91% of all dog bite-related fatalities. In the 10-year period from 2005 to 2015, pit bulls killed 232 Americans, about one citizen every 17 days. Each year, an American has a one in 50 chance of being bitten by a dog.

Clearly, dogs attacking people is an ongoing and increasing issue in the United States.

Why do dogs attack? In the case of joggers, runners, bikers, etc., it’s because the motion of the person triggers their prey drive. However, not every dog will naturally decide to chase down and bite someone who’s moving too quickly. Those dogs that do have learned to do it — because of human negligence. Some dog owners are not responsible enough to keep their dogs in a secure yard, inside a house, or on a leash. When I ran solo across America in 2006, I was approached many times by dogs that were not properly secured and/or controlled by their owners. At one point I was approached by 3 aggressive dogs while on the edge of a public roadway. Fortunately, I was able to get away without being bitten. West Virginia was the worst state to run across while trying to avoid being bitten by dogs. It seemed like there were loose dogs running all over that state. 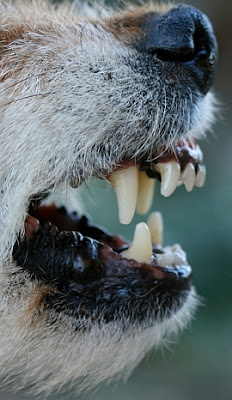 What triggers a dog's aggression/pursuit of a jogger, runner, bikers, etc.? It starts with a dog that barks to defend its territory as a jogger runs by. The dog barks to make that person go away. Over time, the dog learns that barking will make the 'invader' leave, so the dog's excitement level goes up in anticipation. Eventually, the dog becomes more bold and aggressive... to the point of actually rushing toward or chasing the runner or biker. If the dog gets excited enough, this may lead to a bite or an attack.

If you are ever faced with the situation of a dog pursuing you aggressively, the most important thing to keep in mind is that if you remain calm and in control it throws them off. Maintain a calm and assertive state. This outward calm/assertive energy (regardless of how scared you are on the inside) creates a barrier that automatically demands the dog’s respect by letting it know that you are not afraid. When the dog senses that you aren’t threatening it — and are not threatened by it — it will probably lose interest and the situation will subside. Unfortunately, though, this process is not always possible. Here are some tips to keep in mind if you have nothing to protect yourself:
In all cases, be sure to protect your face, chest, and throat. If you must be bitten, the safest place for it to happen is the shin or forearm. a dog bite to the thigh can cause fatal bleeding. Remember, dogs are not naturally inclined to attack humans unless they feel a threat to themselves, their pack, or their territory. Unfortunately, there are too many irresponsible dog owners and that irresponsibility too often places others in unnecessary danger of being bitten/attacked.