So, What's The Story Behind The Umbrella Hat? 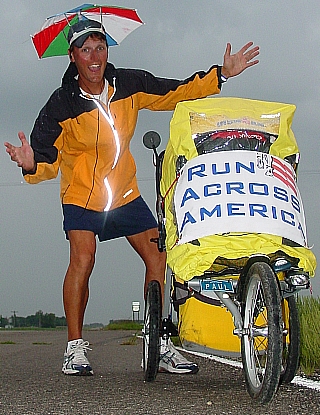 Before I set off to run solo across America in 2006, my then 8-year-old son, Kyler, gave me an umbrella hat to help keep me dry on rainy days. I've taken a picture wearing that hat on each journey run that I've done across a state or country! Today, Kyler is 18 years old and likely thinks his Dad looks pretty silly in that hat. However, to me... the umbrella hat is priceless because it was given out of love and concern for my well being.

I must admit, each time I put on the umbrella hat it turns heads. It's not something you see every day! However, you too can have an umbrella hat. They're not very expensive (less than $10) and come in a variety of colors. I like the multi-colored one that Kyler chose!

The umbrella hat has even made it onto the big screen in the movie Bruce Almighty when actor Jim Carrey (as Bruce Nolan) wears it in the "Maid of the Mist" scene. Actor Bill Murray also wore an umbrella hat in the movie Space Jam. 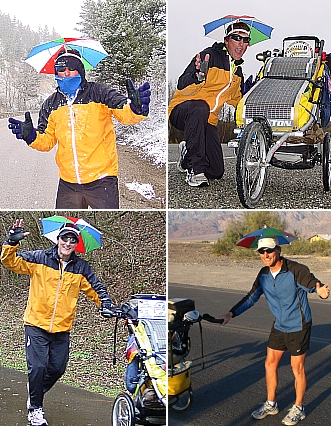 In December 1880, there was a patent taken out on the umbrella hat (Patent 250,803). Today, the umbrella hat is often associated as a cheap and comical novelty item, but it can be used to shield a person against rain or sunshine hands-free. Umbrella hats are particularly useful to wheelchair users who need the use of both hands in the rain. It is also useful for gardeners, cyclists, walkers, shoppers, hunters, fishers and general manual laborers.

However, you must be careful if lightning is occurring. In 2012, a 19-year-old gentleman was wearing an umbrella hat in the United Kingdom when he was struck by lightning. It is suspected that the metal in the hat may have contributed to the lightning hitting him since he was in an open field at the time. He is quoted as follows: "The umbrella hat has metal spokes, which didn’t help, but at 6ft 4in I was the tallest thing there so may have been hit anyway. But the hat stopped my head taking the full force and saved my life.” Yes, that's right. He believes the umbrella hat saved his life.

Just a couple of weeks ago at a Boston Red Sox vs. Los Angeles Angels baseball game they were giving away umbrella hats. So, they are around. When is the last time you saw someone wearing one? 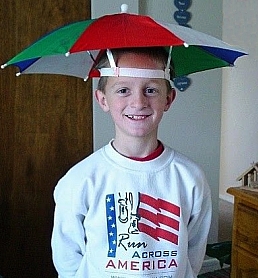 I just had to end this post with a picture of my son Kyler, which was taken when he was 10 years old. He's wearing both a run across America sweatshirt and the umbrella hat! I still have the hat and whatever my next running adventure will be I'll certainly be taking along the well-traveled umbrella hat. Thanks Kyler!