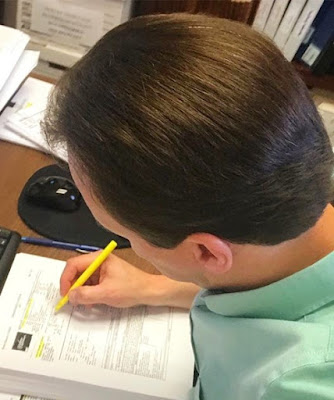 A couple of days ago, I cut my own hair. I figure that it was about the 180th time that I've done so. Let me explain.

When I was growing up, my mother would cut my hair. I remember watching her technique in the mirror as I went through the various "hair stages" of my teen years. In the late 1970's I had it long and parted on the side, and in the early 1980s I opted for shorter hair parted in the middle. My mother did a great job every time and I went off to college in 1983 having never been to a barber.

As a typical broke freshman in college, I had little money for extras. In an effort to save myself a few bucks, I decided to cut my own hair -- recalling the countless times I watched my mother in the mirror. With a pair of paper-cutting scissors and a tiny cracked mirror, I gave it a shot at the age of 18. Well, suffice it to say it wasn't quite like my mother did it and I ended up wearing a hat for many weeks thereafter.

When I once again reached the point of needing my hair cut, I decided to try again. This time I got a better pair of scissors, a mirror without a crack, and went slower. I had better success, but the hat was once again needed for a time. Suffice it to say, I went through my college days without going to a barber -- and got to the point where a hat wasn't needed after a cutting! Keep in mind, this was long before the existence of the Internet. Today, there are many YouTube videos on how to cut your own hair.

As the years went by, I continued to cut my own hair. It was convenient and a money saver. If you figure that the average cost of a guy's haircut is $20, then I've saved nearly $4,000 since 1983 by cutting my own hair. On average, I cut/trim my hair every two to three months. A 2015 survey showed that 11 percent of men cut their own hair. It was reported that 12 percent allow a family member or friend cut their hair, while 32 percent go to a hair salon and 45 percent go to a barbershop.

I've been cutting my own hair for 36 years and will continue to do so until I'm simply unable to. Someday I may walk through the doors of a barbershop for the first time, but until then I'll be my own barber.