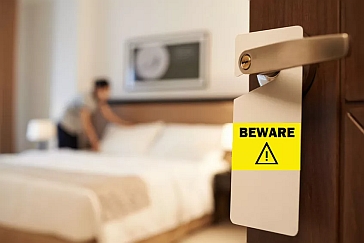 I was recently in Denver, Colorado, on business and stayed at a nice hotel downtown. It had all of the usual amenities and was comfortable. I've spent countless nights in hotels -- usually while running across a state or country, or preparing to give a school presentation somewhere. Traveling for work-related reasons is unavoidable, and I'm used to sleeping in new places. However, I always prefer being at home with my wife by my side.

In recent years, there have been hidden camera investigative reports of hotel hygiene practices, with the hotels ranging from the mid-priced business hotels to the top of the line luxury establishments (5 star). A blatant disregard for hygienic practices that could lead to serious infection was observed in numerous hotels when housekeeping staff cleaned (or didn't clean, as the case may be) the drinking glasses in the hotel room. Housekeeping staff was caught on film either rinsing the drinking glasses (in preparation for a new guest) with water only, or washing them with industrial cleaner labeled "do not drink." In other cases, dirty bath towels -- from the previous guest- - were used to dry the glasses after their reckless rinse in tap water. Another film clip shows a woman wearing latex gloves cleaning the guest toilet and then proceeding to rinse the drinking glasses, without removing or changing the gloves.

Pest professionals report finding bed bugs in 68 percent of U.S. hotels/motels. A recent survey shows that 25 percent of all people who stay in a hotel check for bed bugs. Do you? Also, in an average year, one of 12 hotels and motels report a structure fire, according to the National Fire Protection Association. Eight percent are intentionally set. What about your data? Did you know that over a third of all known security breaches happen on hotel networks?

According to research from Texas A&M University, 95 percent of hotel whirlpool tubs had fecal-derived bacteria, 81 percent contained fungi, and 34 percent contained staphylococcus bacteria -- the stuff that causes Staph infections. And don't believe that your premier suite at a five-star hotel is necessarily cleaner than a lesser star location. A study conducted by Travelmath found that four- and five-star hotels actually had significantly more bacteria than their three-star counterparts.

A study published in Scientific Reports reveals up to 67 different types of bacteria lurking within the reservoir and drip tray of hotel coffee makers. What about the bed (aside from bed bugs)? According to one UK study, an average of 2,100 people will have slept on the hotel mattress before you! Want to watch TV in bed? Studies have shown that the remote can be holding over two million colony-forming bacterial units, on average. Don't think that the desk in your room is much cleaner. It has been found that the desks can have over one million colony-forming bacterial units per square inch.

Finally, while most hotels have strict laundry practices, that doesn’t necessarily mean that every part of the bed is as thoroughly-laundered as you’d think. In fact, some studies have shown that the duvets on hotel beds are rarely washed, if ever.

Yep... I prefer spending the night in my own cozy home rather than a hotel!