Would You Drive In Circles Around a Roundabout For Over 3 Hours? 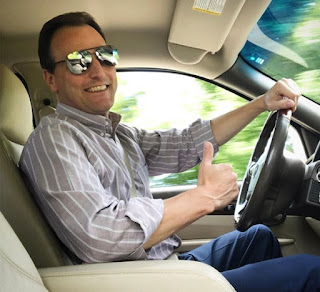 A few years ago, an Indiana man set the world record for the longest time driving in a roundabout (3 hours, 34 minutes, 33.24 seconds). Mr. Oran Sands -- age 64 at the time -- chose Carmel, Indiana as the location where he would go around and around for 65 miles in his 1987 Volkswagen.

Carmel, Indiana has become internationally known for its roundabout network. Since the late 1990’s Carmel has been building and replacing signalized intersections with roundabouts. Carmel now has over 100 roundabouts, more than any other city in the United States.

I've driven many roundabouts, both in the United States (including Carmel, Indiana) and Europe. I can tell you this... they're not my favorite. There are simply too many people who don't know how to properly navigate a roundabout. I know that the idea behind roundabouts is to keep traffic flowing and to increase pedestrian safety. However, I've had several near collisions with people who don't know how to properly drive in a roundabout.

According to extensive research and traffic data taken from around the world, roundabouts decrease intersection collisions while increasing traffic efficiency. This idea is wonderful in theory; however, confusion and lack of education on how to use roundabouts can make them as dangerous as normal intersections. The three most common errors made by drivers in roundabouts are:


A few years ago, Jeffersonville, Indiana opened a new roundabout and within 9 months there were 134 crashes -- including two semi trucks that tipped over. The Indiana Department of Transportation has boasted national figures that show roundabouts are safer, more efficient and greener.  According to the Insurance Institute for Highway Safety, roundabouts (compared to four-way intersections) increase traffic capacity by 20 to 50 percent and decrease traffic delays by 20 percent, thus saving fuel use and reducing pollution.

According to the Federal Highway Administration, roundabouts are proven to decrease fatalities by 90 percent and all crashes by 35 percent. However, the Indiana Department of Transportation has stated that it excludes data from the first three to 12 months of a roundabout opening because "it should be expected that motorists are adjusting to the new intersection during this time frame." In other words, the transportation department knows that there's going to be a spike in accidents during the first year following a roundabout opening and doesn't want that data included in its safety records.