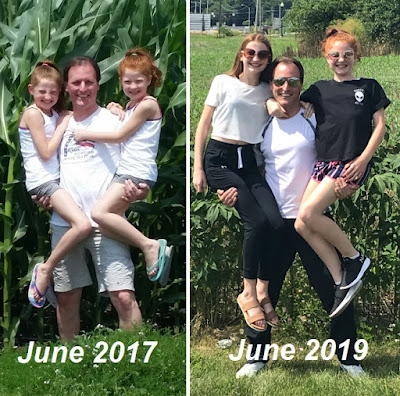 My two youngest step daughters, Hannah (14) and Kyndal (11), have grown so much recently. Looking back at the photos taken in 2018 at the wedding of Kelley and I show that the girls have grown a lot since then. They are beautiful, intelligent, fun young ladies and I am so blessed to be their Step Dad.

Being the father of my four adult children, I'm quite familiar with how kids grow through their infant, toddler, adolescent and teenage years. Height increases, weight increases, hair grows, teeth come in... come out... and come in again, and eventually puberty arrives. The first year of life is a time of amazing change during which babies grow 10 inches in length (on average) and triple their birth weights. However, I'm long past years of having children at that stage. The stage that I'm experiencing now with Hannah and Kyndal is that of approaching puberty -- which is usually between 8 to 13 years of age in girls and 10 to 15 years in boys. Puberty lasts about 2 to 5 years and during puberty an average boy or girl might grow four inches in a year -- twice the usual average! Generally, girls hit puberty earlier than boys, though some girls might lag behind their peers in breast development or getting their first period. All of this is usually normal. Depending upon when a child starts puberty, he or she could continue growing for several more years. Girls who start puberty late often continue growing into their late teens. Boys who start puberty late have been known to grow taller into their early 20s.

Interestingly, recent studies have shown that children are reaching puberty at a younger age than previous generations. Why? Some researchers believe that diet has something to do with it, pointing to better nutrition as being the definitive change in children over the past century -- good protein, vitamins and minerals.

I treasure this time that I have with Hannah and Kyndal. They've certainly grown a lot in the past two years, and not just physically. They're maturing in many ways and I want to savor these years of their pre-teen and teen lives. Life is about change... about growth... about moving toward, moving up, and eventually moving out. I'm going to hold on to these two girls with all of my heart and I will forever cherish these years of their lives. I'm still pretty new in my role as a "Step Dad," but I am blessed beyond measure to be able to grow as a Step Dad while my Step Daughters are growing up.