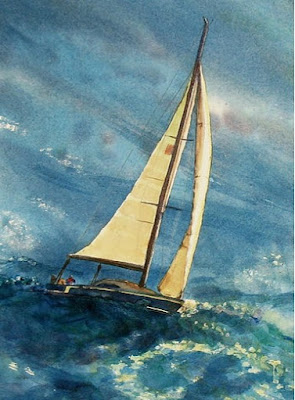 Recently, I was driving and the song "Sailing" by Christopher Cross came on the radio. That song, from 1980, reminded me of a sailing experience I had at age 18 where I nearly watched raging waters take my friend's life.

I grew up in Alaska and graduated from high school in the capital city of Juneau. One of my schoolmates owned a small sailboat. He had grown up sailing on the waters around Juneau and was rather experienced for his age, but we were not prepared for what would transpire one day in 1983.

My friend's parents owned a hunting cabin on a nearby island and he and I decided that we would sail to the island to restock some of the supplies. We drove Highway 7 (Glacier Highway) to where it terminates by Point Bridget State Park -- about 36 miles from downtown Juneau. From there, we sailed out of Berners Bay to the edge of Admiralty Island -- an island in the Alexander Archipelago in Southeast Alaska. The island has the highest density of brown bears in North America, and that is where the hunting cabin was located. In fact, there are more brown bears on Admiralty Island than in all of the rest of the United States combined. It also has more than 2,500 bald eagles, which makes it home to one of the world's greatest concentrations of nesting bald eagles.

On our way to Admiralty Island, we sailed by Shelter Island -- a relatively small island where some have captured photographs of breaching humpback whales just off of its shoreline. We had a pleasant sail to Admiralty Island, arriving at sundown and hiking in to the cabin with rifles in hand just in case a brown bear were to approach. We spent the evening in the cabin only to awake to a tremendous rain/wind storm. In fact, the waters were so rough that we had to wait a couple of hours before we could even attempt to get the sailboat launched from the shore. Once we were on the water, we began to realize just how challenging this sailing excursion home would be! We got out into deeper water and the small boat started to take on water as the full sail was literally pushing the boat over onto its side. Both of us used some rope to tie ourselves to the boat because we were getting knocked around so much, and we were bailing out water the best that we could. The only way we were going to make it was to lower the sail and use the kicker outboard motor on the sailboat.

My friend untied his safety line and went to the bow of the boat to put the main sail into the sail bag, which was tied to the front of the boat. The sail was blowing all over and needed to be contained. As he was attempting to bag the sail, a wave washed him over the front bow and he disappeared into the deep, cold water. I stopped the motor on the boat, untied myself, and dashed to the bow... calling his name and looking frantically for him in the choppy water. After what seemed over a minute, he surfaced and was clinging to the bag that was still tied to the bow of the boat but was in the water just below the bow. I got him back into the boat and he was extremely cold. Even though he was obviously freezing, he helped to sail the boat to Shelter Island -- which was roughly a midpoint on the trip back. We beached the boat in the storm, turned it on its side the best that we could to help block us from the wind/rain, and attempted to make a fire so that he could try and warm up. We stayed on Shelter Island for a couple of hours and in that time the weather started to improve. We then sailed the rest of the way back to where we began the journey.

I will never forget the feeling of seeing my high school friend go overboard and being out in the middle of those cold raging waters on a small sailboat. My friend ended up being fine and although he and I haven't communicated in over 30 years, I do know that he ended up purchasing a 36-foot Catalina Yacht later in life and is still a sailor. I've been on sailboats since that nerve-racking experience in 1983, but I can tell you that I prefer my feet on the ground.