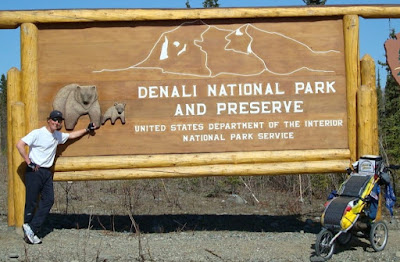 In 2021, the priest of the Catholic church I attend is aiming to climb Denali in Alaska -- which is the highest mountain peak in North America with a summit elevation of 20,310 feet above sea level. You may know the mountain better by its former name, Mount McKinley. It's believed that Denali is a word of the Alaska Native Athabaskan people (Koyukon) that means "high," "tall" or "great one." Denali is the third most prominent and third most isolated peak on earth, after Mount Everest and Aconcagua.

My 500-mile solo run through Alaska in 2009 included a run through Denali National Park and Preserve. Having grown up in Alaska, I had ventured to this part of Alaska a few times and in 2009 I truly enjoyed running into the park on a blue sky day with Denali in clear view.

In 1903, James Wickersham recorded the first attempt at climbing Denali, which was unsuccessful. In 1906, Frederick Cook claimed the first ascent, but this ascent is unverified and its legitimacy questioned. The first verifiable ascent to Denali's summit was achieved in 1913 by climbers Hudson Stuck (an Episcopal priest), Harry Karstens, Walter Harper, and Robert Tatum, who went by the South Summit. In 1951, Bradford Washburn pioneered the West Buttress route, considered to be the safest and easiest route, and therefore the most popular currently in use.

Denali is characterized by extremely cold weather. Temperatures as low as −75.5 degrees Fahrenheit and wind chills as low as −118.1 degrees Fahrenheit have been recorded by an automated weather station located at 18,733 feet on the mountain. According to the U.S. National Park Service, in 2019 there were 1,226 people who attempted to climb Denali. The average trip length on Denali was 17 days. The average age of male climbers was 39 and for female climbers it was 37. A majority of the summits occur in June.

Over 24,000 climbers have attempted Denali with about a 52 percent success rate. More than 100 climbers have died attempting to summit the mountain. As of the 2020 season, all climbers must register and pay a $375 fee to the National Park Service. There is a limit of 1,500 climbers, guided or unguided, from April 1 to August 1. The National Park Service has approved seven companies to guide on Denali. The costs can range from $9,500 to $11,000 depending on who you use.

So, how does climbing Denali compare to running across the United States? Well, compared to the 52 percent success rate for reaching the summit of Denali, about 75 percent of those who attempt to stride across America by either walking or running are successful. Although you don't need a guide to cross America on foot, the cost is somewhat comparable to climbing Denali. I spent about $7,000 for my 108-day solo run across the country. When it comes to the death rate of those who have attempted to run across America, it is actually higher than those who have perished while climbing Denali (based on the number of deaths compared to the number of participants). Slightly more than 1,000 people tend to attempt the Denali climb each year, compared to only about 20 people who take on a transcontinental crossing on foot. Finally, climbing Denali involves about 26 miles up and down (West Buttress route). Running across America requires about 3,000 miles more than that.

Finally, in July 2009 the first known Mass ever celebrated at the top of Denali took place when three childhood friends from Poland summited the peak. Father Krzyaztof Grzybowski and his brother Father Robert Grzybowski celebrated a Mass with their childhood friend Adrian Przyluski attending. They described it as a most exceptionally clear and calm day after a long climb from 17,000 feet on the West Buttress route. They were able to spend about 45 minutes at the summit. The men noted that they had to blow on the wine to unfreeze it for the Mass.

I wish my church's priest, as well as all future Denali climbers, the best of success!