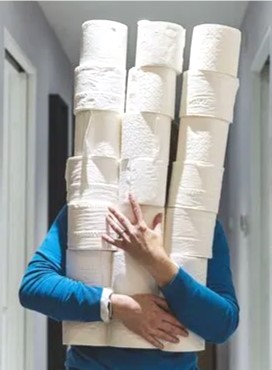 During my years of running solo across states and countries, I was often on the receiving end of interesting comments by those who would see me run by while pushing a jogging stroller of gear. I've been retired for several years from such running adventures and haven't received random comments from strangers since then -- until yesterday.

As many are aware, toilet paper is getting more challenging to find in local stores. For some reason, people feel the need to purchase as much toilet paper as possible in light of the Coronavirus pandemic. Yesterday, I ventured out on my lunch hour to see if I could locate any to buy. The first store I went to was completely sold out. Empty shelves are the scene in a majority of grocery stores these days. I was resigned to the fact that I likely would not succeed on my toilet paper outing. My last stop was a Walmart. I walked in hopes of finding at least one roll. As I walked through the store, I kept my eyes open for any shoppers that might have toilet paper in their carts. Unfortunately, I didn't see any.

I got to the toilet paper aisle and saw a cut open brown box at the end of the empty aisle. Much to my surprise, there were about a half-dozen packages of toilet paper! There was a limit of one per customer, but I scored on a 12-pack of mega rolls! Seems ridiculous to be excited about locating such a common item on a shopping list, but under the circumstances I was pretty thrilled.

I tucked the 12-pack under my arm and headed for the checkout counter. I noticed a few people looking at me, nearly in disbelief by what they were seeing -- a guy carrying toilet paper! I checked out and headed for my truck. As soon as I left the building a woman said, "Oh good! They have toilet paper!" As I got closer to my truck another woman said something similar. Before getting into my truck I was asked how much toilet paper the store had. I replied, "Only a few packages, and they'll likely be gone in minutes." The person didn't reply, but headed straight for the store doors.

Why are people hoarding toilet paper? One psychologist explained by saying: "There is comfort in knowing that it’s there. We all eat and we all sleep and we all poop. It’s a basic need to take care of ourselves." Another psychologist says: "If people did not find the food that they wanted, they could buy other food. For toilet paper, there are no substitutes."

Stores are restocking almost daily, but the problem is that certain items, like toilet paper, don't stay on the shelves for long. I went out to do my toilet paper shopping at 11:00 a.m. yesterday and at that point 95 percent of the toilet paper was gone from the local Walmart. If you wait until the lunch hour or later in the day, in most instances you'll be out of luck.

So, just how desperate are people getting for toilet paper? It was reported this week that interstate rest stops have become the target of toilet paper thieves. In Oregon, a thief smashed the back window of an SUV and stole two cases of 30-roll toilet paper - with similar scenes unfolding in other states. There have been other reports of janitorial closets being broken into and cleaned out of toilet paper, and a Utah police department having all of its toilet paper swiped from its public restrooms. The stories of toilet paper theft are growing every day.

Everyone needs to relax and to stop hoarding toilet paper. Think about others, and if you can spare a square then do so.