Huey Lewis Then and Now: Hearing is Gone, But the Songs Go On! 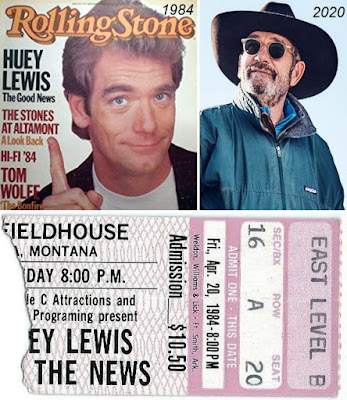 A few years ago, I stumbled upon the ticket stub for the first concert I ever went to. At the age of 19 I saw "Huey Lewis & The News" (April 1984) at the University of Montana Fieldhouse when they were on tour for their album "Sports!" As a college freshman, I paid only $10.50 for admission. Its been 36 years since I attended that concert, which was one year before the movie "Back To The Future" was released. Huey Lewis & The News had two hit songs in that movie -- "The Power of Love" and "Back in Time."

Huey Lewis and the News just released the group's first new full-length album of original music in almost two decades. For most bands that would mean the group would be going on tour, but not for Huey's band. Sadly, Huey Lewis is losing his hearing, a symptom of his Meniere's disease. Right before a show back in 2018, it hit him hard and he couldn't hear the band... and he couldn't play the music. He has called it the worst night in his life. It's possible that he'll never be able to perform again. In fact, the songs on his new album were actually recorded five years prior to his hearing loss.

These days, Huey enjoys time at his remote Montana ranch. He was recently asked about the possibility of his hearing never returning. He responded: "I haven’t allowed myself to go there yet. I keep thinking I could maybe sing again. I get down sometimes, but it’s better to remember that life is okay. I’ve had a great run." Huey will be 70 years old this summer.

Thanks, Huey, for giving me the best first concert experience I could have ever asked for! Your music is timeless... and "the heart of rock and roll is still beating!"