My Experience Taking "Selfie" Photographs Before it Was Ever Popular 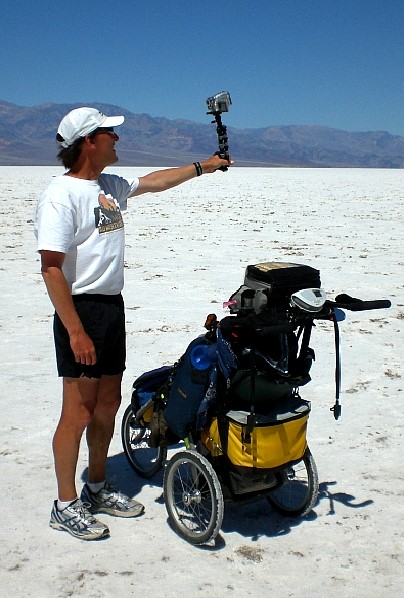 This photo is of me at Badwater Basin, Death Valley, making a video for my website back in 2011 when I completed my 500-mile solo run across the Mojave Desert. You wouldn't believe how many people have asked me how I captured all of the pictures and videos of myself as I ran solo across states and countries between 2006 and 2011. It wasn't rocket science. I simply got pretty good with a tripod and a self timer!

Nowadays, people take photos and make videos instantly with smartphones. However, back then it wasn't very common and I had to make use of other camera gear. For photos, I would usually set the camera on a tripod, set the timer, hit the shutter-release button, and dash into position before the timer elapsed. Sometimes, it took many tries before I got an image that had me and the support stroller in the frame properly. There were times when the wind blew the camera over and times when a car or truck would come into the photo and mess up the shot. Taking photos of myself while on adventure runs took some patience.

It wasn't until 2013 that taking "selfies" became a trend... a viral activity. I had taken countless selfies before it ever became popular, because I wanted those students who were following my progress online to see me in various locations. Ultimately, my selfies were for sharing and educational purposes rather than for attention or popularity.

I took thousands of pictures as I crossed the United States, Germany, Alaska, Montana and the Mojave Desert. Many of the best ones can still be found online. Click on any of the links below to see some of my adventure photos: