A New Children's Book by the Director of the Boston Marathon 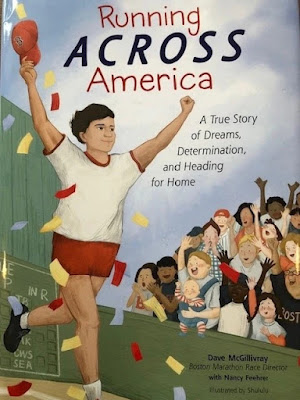 Its been almost 13 years since I ran into the Atlantic Ocean to finish my solo run across the United States. Back then, I was encouraged by Dave McGillivray -- the Boston Marathon race director who has personally run 156 marathons, including 47 Boston Marathons (32 of them were run after the race was over and he was off the clock as race director, including last year after having triple bypass surgery). Dave sent me words of encouragement as I worked at running over 3,200 miles across the country.

This month, Dave released his second children’s book: Running Across America: A True Story of Dreams, Determination and Heading for Home -- which he wrote with Nancy Feehrer. The book is about his 3,452-mile run across America in 1978, from Medford, Oregon, to Boston, Massachusetts.

Here's what Dave has said about the book: "There’s a lot of messages in “Running Across America” ... about understanding your own ability, setting goals and then the hurdles along the way. Sometimes you don’t anticipate them or you can’t train for them, so you have to deal with them as they come at you — whether it’s running over the Rocky Mountains or running through a swarm of grasshoppers. Whatever it might be, we’re all confronted on a daily basis with challenges and hurdles. It’s just a matter of how you process them and how you deal with them."

Shortly after finishing my coast-to-coast run, I thought about putting together a children's book that would feature my support stroller as sort of a character... and which would be the voice of what it's like to go across the entire country. My book project never left the starting line, but perhaps in my retirement years I'll pen it out.