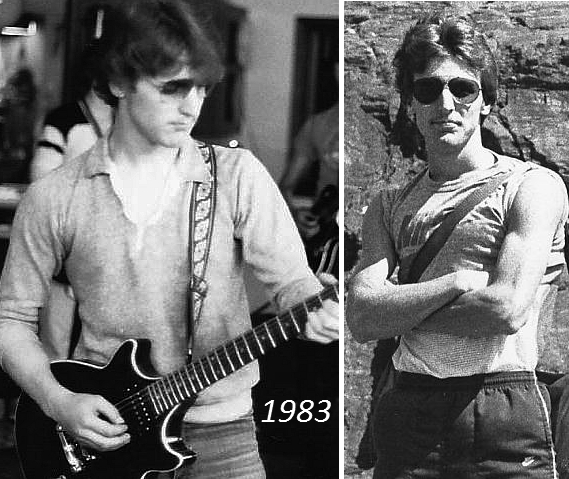 During my senior year of high school (1982-1983), some friends and I formed a garage band. We primarily played to an audience of four people... ourselves! Gerald, Dwayne, Frank and I would try to play some popular songs of the early 80's. We didn't really get 'gigs' -- especially anything that paid money, but did play at a couple of bonfires. Each of us had some average teen music abilities. I was primarily on acoustic guitar and provided some vocals; Gerald was on electric guitar; Dwayne played guitar and bass, and sang as well; and, Frank was on drums and saxophone. Again, it was truly a 'garage band.'

We decided early on that we should have a name for our band. Since I was the yearbook editor and a writer on the school newspaper, I was nominated to come up with the name -- because I was supposedly good with words. I listened to some recordings of us playing our instruments and there was a certain roar to it, perhaps because we primarily played guitars and were inexperienced with reverb settings on our amps. It reminded me of a strong, raging wind. So, I chose the name "Tempest" -- which literally means a violent, windy storm. In the years following, I would learn of other bands forming under the name "Tempest," including a Christian rock band and a Celtic rock band.

When it came time to graduate from high school, we all went our separate ways. The raging wind of "Tempest" blew out and I haven't been in touch with those guys for over 30 years. Since high school, my 'band' involvement has primarily been on church worship teams. However, I haven't done that for about 15 years or so.

Recently, my 22-year-old step-daughter Rachel (who has a wonderful singing voice!) and I have been talking about possibly putting some songs together for "Open Mic" nights at local spots. In fact, my sweet wife recently purchased a six-string guitar for me so that I'll have a new one that can plug into an amp. Of course, I also have my 12-string acoustic guitar that I enjoy as well. So, perhaps I'll be playing my guitars again in front of people. Its been 36 years since the days of Tempest, but I think I can still manage to put some songs together.

I've shared before in this blog that I've been playing guitar since 1975, when I was ten years old. I'm self taught and although I have no idea how to read sheet music, I tend to figure out songs by ear. That's how I first learned how to play nearly 45 years ago. Back then, I listened to a lot of John Denver music on the radio.

Guitar has been, and always will be, a part of my life. My guitars have gathered a lot of dust over the years as I've been busy with other things -- such as raising children; working at my office; running across states and countries; and, so many other things that have taken priority in life. I no longer look like the 18-year-old guy I was with Tempest, as shown in the photos accompanying this post. My hair has receded over the years and I no longer wear sunglasses just because I think it's cool. However, I still love playing the guitar and when it comes right down to it... you have to love the instrument more than the hair. The instrument has more staying power!

These days, the sound from my guitar isn't like a raging wind, but perhaps that's a good thing!  And, I don't have to worry about my hair getting in my eyes when I play. Yep... I have to try and find the positives anywhere I can!