"First Person On Record To Ever Run Solo Across..." WAIT A MINUTE! 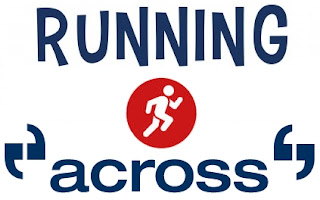 An individual recently announced on their website that they are "the first person on record to ever run solo across every individual state in the U.S." -- accomplishing the task in numerous planned runs from 2010 until 2019. I must say, that person's definition of "across" is different than mine. First of all, let's look at the actual definition. "Across" is defined as being 'from one side to the other side of something.' I believe we're all familiar with that preposition. In 2006, I ran "across" the United States, starting on the edge of the Pacific Ocean and finishing the run 3,260 miles later on the edge of the Atlantic Ocean. It was truly "across" the USA. It included 15 states, but some of those states I only ran in a portion of. So, I don't claim that I ran "across" 15 states while crossing the country, but I can accurately state that I ran "across" the United States.

Now, getting back to the person who is claiming to have recently become the person to ever run solo "across" all 50 U.S. states, there is something about the claim that must be noted. According to that person's publicized map showing the route taken, there are several states that were minimally run by the individual, including: New Mexico, West Virginia, Iowa, and Alabama -- just to name a few. You can't log only about 10 percent of the distance "across" a state and say that you ran "across" the entire state. You may have run "in" the state, but unless you have truly traversed the width or length of the state (taking into account the average distance to cross it from border to border), then it's not truly "across." Of course, that's my opinion and there are likely those who would disagree.

The other issue I have is this person's claim to have run "solo" across every individual state in America. That, in my opinion, is an exaggeration. In fact, the person frequently had a support vehicles and didn't have to carry any of their gear. How were they solo? Perhaps it's because this particular runner ran most of the miles alone -- but that does not take away from the fact that there were support vehicles covered with sponsor logos during these state "crossings" -- which provided food, water, and other necessities without the need for the runner to carry any of it. Therefore, I take exception with the use of the words "across" and "solo" with respect to the claim of becoming "the first person on record to ever run solo across every individual state in the U.S." If you want to do a Google search, I'm sure you'll locate the individual. I'm not going to promote the individual's name in this blog.

Don't get me wrong, I'm all for running endeavors and adventure... particularly those that are for promoting a worthy cause. What I have heartburn with is the how some of these people apply words to their accomplishments that are not completely accurate, but it helps them to promote themselves and to capture more attention and, as a result, more opportunities -- particularly opportunities that may put money into their bank accounts.

As most of you know, I retired from running solo across states and countries a few years ago. However, I do have my attention captured now and then by those who are undertaking such challenges. It's unfortunate to know that some people find the need to exaggerate their accomplishments for one reason or another.

By the way, if you want to read about a true solo ultra-endurance runner who -- for years -- has been chipping away at a lifelong goal of truly running "across" all 50 U.S. states, do a Google search for Brian Stark -- (a/k/a "The States Runner"). I recall that he has at least 34 states completed -- and since he's a middle school teacher, he does these running adventures each summer during the course of a couple of weeks. Brian is a dad, husband, teacher and Eagle Scout who is a very accomplished long-distance runner. I recently read these words from Brian: "Just to be clear, I run from one side of a state to the other, often alone and wearing a backpack. Many of these states are 500 miles across. So imagine running nearly 20 marathons in a row in less than two weeks and I've done that 34 times."

In my opinion, Brian understands the meaning of "across."