My Dad is as Old as Chocolate Chip Cookies! 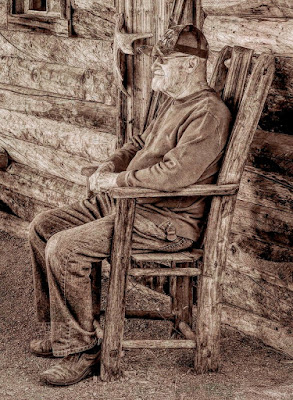 My father's 86th birthday is next week and my mother recently took this photo of him -- which she modified the color of in a photo editor. You can see him sitting in an old wooden chair outside of a rustic Alaskan cabin. He's been married to my mother for 65 years and they enjoy living in the middle of Alaska's wilderness in a beautiful home that my father built himself (not the cabin shown in the photo!). They raised seven children and are quite content to see out their remaining years side-by-side in the beauty of Alaska.

Recently, I was thinking about all that my father has seen develop in the world during his lifetime. He was born in 1933 when Franklin D. Roosevelt was the U.S. President. The average annual wage was $1,550.00 and a gallon of gas cost 10 cents. My father can say that he's older than the Golden Gate Bridge in San Francisco since construction began the year he was born and wasn't completed until 1937. Also, back in 1933 Wiley Post became the first person to fly solo around the world, and Albert Einstein emigrated to the United States from Germany. Also, my father was born in the year that the first drive-in movie theater was opened in America.

Can you imagine being born the same year that the chocolate chip cookie was invented, or when the board game Monopoly was created? My Dad can say that he was born when those things came into existence! He has certainly seen a lot in his 86 years! His path in life has taken him to many places, and at the age of 43 he took our family to Alaska to live and that is truly home for him. He likes to share that beautiful state with others through his drone photography, which you can see here.

My Dad was born 32 years before I was and although he gets to say that he's as old as chocolate chip cookies, I can say that I was born in the same year as The Pillsbury Doughboy -- 'Poppin' Fresh' (1965). Hmm... just doesn't sound as cool as saying you're as old as a cookie!