Not Even Polio Could Keep This Tough Ranching Woman Down! 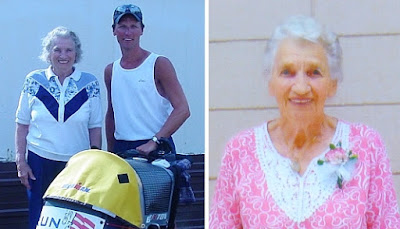 When I ran across America solo in 2006, I spent many nights in different homes along the way. When in the area of Marmarth, North Dakota (population 123), I was fortunate to be able to meet an 80-year-old woman, Nellie Rost. At that time, she was living alone on her ranch -- which she maintained herself. I was impressed with her energy and strength, and recently learned that Nellie is now 93 and is still maintaining her ranch!

At last count, Nellie had 11 grandchildren, 40 great-grandchildren, and 7 great-great-grandchildren. When she became school age, she and her brother would travel two miles by horseback to attend school. During the winter, her father would heat rocks in the oven and then place them under tanned hides which covered her and her siblings to keep them warm as he took them to school.

In 1952, Nellie was stricken with polio. A few years ago while celebrating her 90th birthday, she told a local newspaper, "My doctors told me I would probably never walk again. They did not know my determination." She literally crawled, hobbled, and willed herself to successfully walk again. She worked beside her husband in the dairy business, cattle ranching, livestock feed business, and house construction. Nellie's husband passed away in 1997, but she remained on the farm raising cows, chickens, llamas and ostriches. With the help of her family and friends, she's still active in raising a small herd of cattle and a few chickens. Also, she still drives a riding lawn mower to mow her yard, pitches loose hay to her cows, and plants a garden every year.

Back in August 2006, Nellie opened her home to this long-distance runner crossing the country. She cooked me a wonderful dinner and shared encouraging words. I'll never forget her.