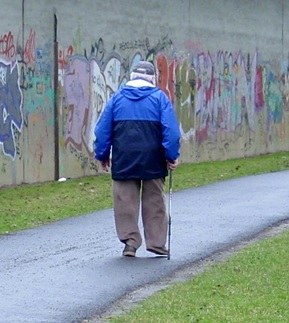 As I embarked on my 3-week, 500-mile solo run across Germany in 2010 I wasn't sure what to expect from the locals. I had read that Germans are stoic people who strive for perfectionism and precision in all aspects of their lives. They place a high priority on structure, privacy and punctuality. They do not admit faults, even jokingly, and rarely hand out compliments. Their attitude can come across as unfriendly; yet, there is a keen sense of community and social conscience.

However, I was an American who didn't speak German... and who was running across their country pushing a yellow jogging stroller of gear. How welcoming would they be to me? That question ran through my mind during each day of training for the journey. Germany is at the center of Europe -- not only geographically, but also in terms of politics and economics. The country is Europe's second most populous after Russia, with more than 83 million people. I would encounter many of them as I would stride from one side of that country to the other.

After just a few days of running in Germany I concluded that nobody was going to acknowledge my existence. I would pass pedestrians on sidewalks -- often with their heads looking down -- and would say (in my best German vernacular) "Guten Morgen!"... which is Good Morning! I would get no response, not even a glance. I kept trying, but after several days I decided that I wasn't going to have any success in getting a reaction from the locals.

One day I was walking down a pedestrian path drinking water as I pushed the stroller and an elderly gentleman was approaching. He read the sign I had on the front of the stroller which briefly described what I was doing -- and it was written in German text. He stepped in front of the stroller, bringing me to a stop. His eyes flew open wide as he read that I was a solo American running across the country to promote youth health and fitness. Suddenly, he began to speak non-stop in German. I wasn't understanding a word and tried to interrupt him with "Sprechen Sie Englisch?"... which is 'do you speak English?' He just kept right on talking, and I interrupted him again -- asking the same question. That's when he walked right up to me, just inches away. He looked me in the eyes and patted me on the cheek saying "Freundlich, Freundlich, Freundlich." With that, he turned and continued on his way down the path.

In German, "freundlich" means friendly. The old man apparently viewed me as a friendly American, although one who couldn't speak German. It was a quick encounter, but one that left me feeling that not all Germans are as unfriendly as non-Germans may think. Somehow, that gentleman saw this out-of-place American as friendly, and I carried that positive feeling with me for the rest of the journey.