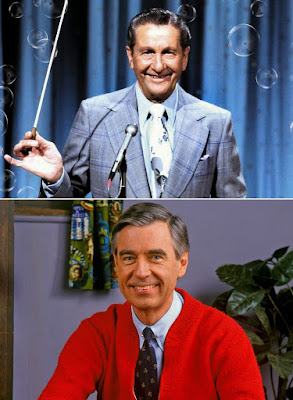 The Lawrence Welk Show aired on television from 1951 until 1982. My parents would occasionally watch the program and enjoyed the range of music -- from polka tunes to novelty songs to big band standards. To this day I remember the closing song ("Till We Meet Again"), and the lyrics are:


Good night, sleep tight and pleasant dreams to you.
Here's a wish and a prayer that every dream comes true.
And now 'til we meet again
Adios, au revoir, auf wiedersehen.
Good Night!

My stepdaughters know that I like to sing this song to them before they go to bed. When I first sang it, they thought I had made it up! I let them know that the song is actually much older than I am. In fact, the Lawrence Welk show first aired nearly 70 years ago!

So, what do I sing to them when they wake up? Well, you can't go wrong with Mr. Rogers' song It's Such a Good Feeling -- which was a part of the Mr. Rogers' Neighborhood television show from 1968 until 2001. Here's a part of the lyrics that my stepdaughters have also heard me sing to help them start their day:


It's such a good feeling
To know you're alive.
It's such a happy feeling
You're growing inside.
And when you wake up ready to say
"I think I'll make a snappy new day."

I'll usually sing the entire song (sometimes changing the last few lines) before heading out the door to the office, even if they've buried their heads under their pillows to try and block out my wonderful vocal talents! I hope that they'll always remember those two little tunes to help them begin and end their day.