I Was Struck By a Car on a Dark Winter Night -- Injured And Left Alone. 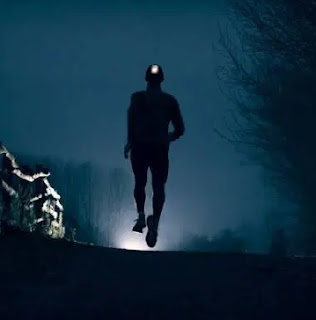 In the late 1990's, I was an avid runner who enjoyed going out for nighttime runs -- even during the winter months. At the time, I was the father of very young children and would find time to log an evening 5 to 6 mile run. One evening, I put on my winter running gear and headed out the door. I had a headlamp and reflective vest to assure that drivers would see me. There was snow on the ground and local plow trucks had done their best to make the roadways clear.

As I've shared before in this blog, I always run facing traffic. In fact, according to local, county and state legislation, pedestrians should face traffic if no sidewalk is available. That particular dark, winter night I was running along a roadway with no sidewalk, and I was facing traffic. It was around 9:00 p.m. when I turned a corner to head down another road where the speed limit was posted at 25 miles per hour. I immediately noticed that the local plows had not pushed the snow too far off of the roadway surface. However, when I looked at the other side of the road there seemed to be more room. I decided to briefly run on the other side, having traffic come up behind me. I crossed the road and resumed running about two feet off of the roadway where there was a bit more plowed area. There were very few cars and I felt that I could safely run the length of that street without facing traffic. That would be a costly mistake!

It's said that being struck by a vehicle traveling at 25 mph is equivalent to falling off a two-story building. I would quickly experience just that! As I was running, I could see headlights coming up behind me on the road. I was off of the roadway by about two feet and striding comfortably at around a 4 mile-per-hour pace. Suddenly, I could hear the vehicle crunching on snow... and the roadway was plowed clear. It was then that I realized that the car had left the road, but by the time I made that realization -- I was hit. The car impacted the back of my legs, tossing me up to where I struck the windshield on the passenger side and the right-hand side mirror. My body sailed through the air, just missing a bank of mailboxes, and I struck the ground hard. I laid there and glanced down the road to see the car putting on its brake lights. The driver paused for about five seconds and then sped off, leaving me lay there injured on a dark, cold road.

I began to evaluate the extent of the damage to my body. My lower back and the back of my legs were hurting. I didn't feel that I had any broken bones, but I was definitely unable to stand up on my own. So, there I laid... in the dark on snow next to some mailboxes... watching the steam of my breath in the light of my headlamp as the cold air made me even colder. Then, I saw oncoming headlights from the other direction. I lifted one of my arms and started to wave it back and forth as I laid on the ground, hoping that the driver would see me. Fortunately, he did. A young man and his girlfriend stopped. He rolled down his window and said, "Hey, did you slip and fall?" I told him that I had been hit by a driver that fled the scene. He and his girlfriend helped me to stand up and I asked him to simply drive me to my home, which wasn't far away. They did and from there I called the police -- who investigated the scene but said that there wasn't enough clues to who the driver might have been. I wasn't able to get a good look at the vehicle, or the license plate. As a result, there was nothing that they could do.

I never went to see a physician. I was black and blue for weeks afterward, and it took some time before I could run again. The one instance I opted to run with traffic coming up behind me is the time that I was struck. I am quite fortunate that it was a low-profile vehicle and not a big truck. Otherwise, I could have been run over.

I'll never forget the impact and the feeling of watching that driver race away. It's a moment that is truly etched into my memory.