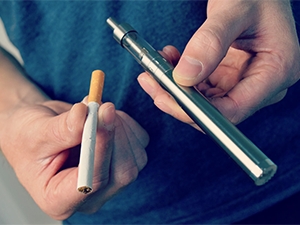 The U.S. Centers for Disease Control and Prevention estimates that 15% of American adults are consistent smokers. Every day more than 3,200 underage smokers light up for the first time – and estimates suggest that every day 2,100 youth and young adults who smoke occasionally become daily smokers. Every year there are 300 billion cigarettes sold in America.

Cigarette smoking is the leading cause of preventable disease and death in the United States, accounting for more than 480,000 deaths annually, or 1 of every 5 deaths. More than 16 million Americans live with a smoking-related disease.

Not a smoker but around someone who smokes cigarettes? You should know that arsenic, lead, and tar are just a few of more than 7,000 chemicals in tobacco smoke.

More and more people, especially youth, are navigating toward electronic cigarettes, or e-cigarettes -- which include e-pens, e-pipes, e-hookah, and e-cigars (which are known collectively as ENDS – electronic nicotine delivery systems). According to the Food and Drug Administration (FDA), e-cigarettes are devices that allow users to inhale an aerosol (vapor) containing nicotine or other substances. To create an e-liquid, nicotine is extracted from tobacco and mixed with a base (usually propylene glycol). Unlike traditional cigarettes, e-cigarettes are generally battery-operated and use a heating element to heat e-liquid from a refillable cartridge, releasing a chemical-filled aerosol.

As of August 2016, the FDA began to apply and enforce key provisions of the Family Smoking Prevention and Tobacco Control Act as it relates to the sales, marketing and manufacturing of e-cigarettes. In addition, e-cigarette manufacturers had to register with the FDA and have an additional two years to submit an application to remain in the marketplace.  Until that time, the nearly 500 brands and 7,700 flavors of e-cigarettes will remain on the market – before the FDA is able to fully evaluate them.

Until the FDA's evaluation is done, there are very few ways for anyone other than the manufacturers to know what chemicals are contained in e-liquids, or how e-cigarette use might affect health, whether in the short term or in the long run. Initial studies show that e-cigarettes contain nicotine and also may add in other harmful chemicals, including carcinogens and lung irritants.

Initial FDA lab tests of e-cigarettes found detectable levels of toxic cancer-causing chemicals, including an ingredient used in anti-freeze. A review of studies found that levels of toxins in e-cigarette aerosol varied considerably within and between brands. Another study found that aerosol from e-cigarettes with a higher voltage level contains more formaldehyde, another carcinogen with the potential to cause cancer. The findings are truly alarming and demonstrate why the American Lung Association called for FDA oversight of these products.

Flavors in e-cigarettes are used to target kids, but they may be harmful on their own. For instance, Diacetyl, a buttery flavored chemical often added to food products such as popcorn, caramel, and dairy products, has also been found in some e-cigarettes with flavors. Diacetyl can cause a serious and irreversible lung disease commonly known as "popcorn lung." In one study, 51 flavored e-cigarettes were tested and flavoring chemicals were found in 47 – with Diacetyl specifically in 39.

A study conducted earlier this year revealed that 58% of smokers would like to quit and many turn to e-cigarettes as a means to try and stop. However, one study found that more than 80% of adult e-cigarette users said that their reason for using it was to 'smoke' in smoke-free zones. Unfortunately, e-cigarettes are being used by more and more young people. A 2015 survey revealed that over 2.3 million American high school students and 620,000 middle school students currently use e-cigarettes.

Compared to non-smokers, light and intermittent smokers are at greater risk for cardiovascular diseases, lung cancer and lower respiratory tract infections, among other things. One study found that smoking just 1-4 cigarettes a day doubles the risk of dying from heart diseases. Several Surgeon General reports and other studies have indicated that the risk of cardiovascular disease and other smoking-related diseases depends largely on the length of time a person smokes, not just the number of cigarettes smoked. As a result, prolonged smoking, despite smoking fewer cigarettes from using e-cigarettes, will continue to put that person’s health at greater risk than if he or she had quit smoking entirely.