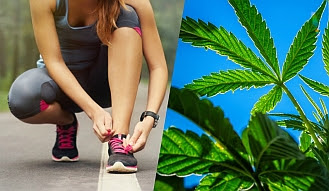 In 1982, singer Adam Ant released a song titled "Goody Two Shoes." In that song is the line, "Don't drink, don't smoke -- what do you do?" The song details his frustration with press intrusion, which was reinforced by the song's music video and his clean cut image.

Why would I be digging up a line from a song that is nearly 35 years old? In a nutshell, I'm a 51-year-old runner who is proud to say that I don't drink and don't smoke. Also, I've never used recreational drugs (which include Cannabis/ Marijuana, Heroin, Cocaine, Ecstasy, Amphetamines, Barbiturates/ Benzodiazepines, LSD, Opium, Psychedelic Mushrooms, and many more).

Runner's World reports that "a growing number of runners are coming out of the proverbial closet as marijuana smokers." As an ultra-endurance runner since 1985 I can tell you that I'm disappointed to hear that. I've never smoked pot or ingested any recreational drug. I'm proud of the athletic achievements I've had that were done solely from quality training, dedication, perseverance, and determination. I've not resorted to recreational drug use or performance-enhancing drugs. In other words, I am a clean athlete and always have been.

The question to be asked is... why are ultra-marathon runners (and really ANY runners) using marijuana? Many claim that certain chemicals within marijuana have anti-inflammatory effects and help them cope with post-workout and post-race discomfort. Though 23 states in America have legalized medical marijuana, and four states and the District of Columbia permit pot for recreational use, it is still largely an illegal drug. Additionally, it remains on the NCAA’s and IAAF’s banned substances list.

There have been studies which have shown that there are cardiovascular effects to marijuana use (like increasing heart rate) and should be seriously considered by anyone at risk for coronary heart disease. Also, there have been some studies that suggest it influences blood flow to the brain, which can influence the risk of stroke. Additionally, chronic smoking is related to pulmonary irritation and gives rise to risk factors associated with various pulmonary problems. Regardless of the facts, some runners won't give up their marijuana use and are persistent in their belief that it enhances their athletic life.

I'll stick to the "runner's high" obtained from the body's naturally-produced endorphins and pass on any 'high' from smoking marijuana. The runner's high has served me well for 41 years and like the old saying goes... 'If it ain't broke, don't fix it!'

I guess you could say that my position is a combination of singer Adam Ant's first name and last name: ADAMANT. I am adamant about my position on recreational drug use, regardless of the 'high' or relief that users claim can be experienced.