Do You Put Your Feet On The Dashboard? If So, You Need To Stop! 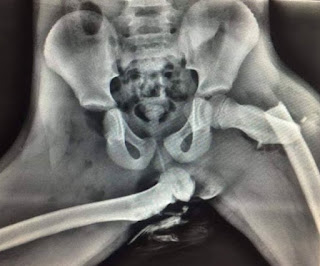 Have you ever been in a car when a passenger sitting in the front puts his or her feet up on the dashboard? Last week, a shocking X-ray started circulating on the Internet to highlight the dangers of passengers putting their feet on the dashboard. As you can see in the photo, an unnamed woman's hips were crushed during a collision as a result of her feet not being on the floor of the car.

It was reported that one hip was broken, while the other was dislocated. It's unclear when the incident occurred or how the women is recovering. Hip fractures generally require surgery, with some patients needing a replacement.

Although there is no law that prohibits a passenger from placing their feet on the dashboard while the vehicle is in motion, there have been numerous reports over the years of people being badly hurt due to having their feet there at the time of an accident. Many times an airbag is deployed -- at a speed of over 100 miles per hour -- causing legs, knees and feet to be pushed back into their heads, causing traumatic head damage. 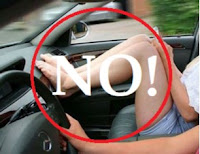 According to the US National Highway Traffic Safety Administration, each year there are passenger deaths caused by airbag inflation, and the majority of those deaths (80 percent) are because the passengers weren't sitting correctly. Please keep in mind that if an airbag deploys while you have your feet on the dashboard, your knees will smash into your face at well over 100 miles per hour, possibly breaking your eye sockets, cheekbones, and nose, dislocating the jaw, and causing vision and brain damage, not to mention breaking the feet, ankles, and legs. This forceful impact causes severe, permanent damage with extreme pain and suffering.