I'll Never Forget My Night In a "Haunted" Montana Cabin 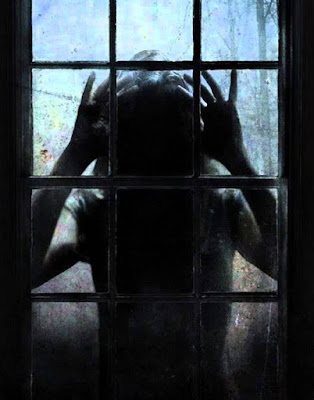 In this blog, I've shared a number of stories about things I experienced while running solo across states and countries. From automatic weapons being pointed at me, to someone wanting me to push a 15-pound watermelon on my stroller. From holding on for dear life as I hung from a guardrail about 50 feet above trees, to having a herd of caribou walk past me in Denali National Park. However, I've only had one experience on the road that involves a "ghost."

During my run across America in 2006, I was offered an evening of lodging at a Montana ranch. I was nearly in the middle of the state when I wrapped up a 34-mile day in 95-degree heat and arrived at the ranch -- which was in the middle of nowhere. I pushed my support stroller of gear up to the ranch and was met by a single woman who appeared to be in her 50's. She informed me that a tour group of 70 Europeans had just left the ranch after a week-long visit and that I should have a quiet evening to rest. I asked her where I would be staying and she pointed to a cabin. Then, she pointed across a field to where her house was located.

It was at that time, as I stood there fresh off the road and drenched in sweat, that she told me that I would earn my keep by washing down her horses before going to the cabin. At first, I thought she was joking. Then, I realized by the expression on her face that she was very serious. She informed me that she was the only person at the ranch and that if I wanted a bed for the evening, I would earn it. I decided to take the opportunity to inquire as to how she took care of 70 European guests for an entire week by herself. She said that she was very good at what she does and that in her kitchen she cooked all of their meals by herself and even took them on horseback outings. Suffice it to say, I had serious doubts about her mental state at that point, particularly considering the fact that I only saw five horses in the corral and enough lodging for perhaps 15 people.

She pointed to the horses and said I could get started, and I walked over to them and began to hose and scrub them down as the sun blazed in the afternoon sky. I was battling tendinitis in my lower right leg and was in need of some ice. After completing the horse-washing task, I headed to the cabin only to find the woman seated at the kitchen table drinking booze. She asked me if I wanted some, and I declined. I looked around the cabin and couldn't help but to notice a layer of dust all over everything. I asked her if some of the "Europeans" had stayed in that cabin and she said, "Yes, but I've cleaned it up for you since they left." It was at that point when I knew something wasn't right!

She then pointed to where the shower was and told me I could go get cleaned up... as she sat there. I opted to try and make a few phone calls with the minimal cell connection available, hoping that she would leave me alone. Eventually, she had her fill of alcohol and got up to walk across the open field to her house. As she left I could hear her loudly instruct me to be at her house around 7:00 PM for dinner, and then the door slammed shut behind her.

I showered and then walked over to her home. Upon arrival, I inquired about ice -- telling her that it would help with the tendinitis inflammation I was dealing with. She said that she didn't have ice, but then told me to follow her. We walked out the back door of her house and she lead me to a small shed. Suffice it to say, I was a bit uneasy. She opened the shed door and there was a very old chest freezer which had wild game meat wrapped in white freezer paper. I could see an old extension cord trailing off toward the house. She told me that I could take a couple packages of meat and strap them to my legs. It's not every day that an ultra-endurance runner is offered frozen game meat to use for icing!

During dinner, she told me fantastic tales of her life... from being a teacher, to being an author, to being a special agent for the U.S. government. She told me that there were foreign prisoners of war that the U.S. government was keeping in camps hidden in the Montana hills, and that she had been to such places. She went on and on about unbelievable experiences she had and I reached a point where I just wanted to go to sleep and run out of there the next morning. I thanked her for dinner and it was at that time that she told me the "rules of the cabin." Rule one was to never lock the doors. Rule two was to never shut the curtains. Rule three was to never turn on the porch light. Those were the three rules which I was to abide by. She didn't explain her reasons for the "rules," but stated them emphatically.

She told me that she would walk with me across the field so that I wouldn't "get lost" on the way to the cabin. It was a dark night with the moon partly covered by clouds. As we walked she told me that the cabin is haunted by the spirit of the elderly woman who used to live there -- before the cabin and it's property became part of the 'ranch.' She said that the old woman actually died in the bed I would be sleeping in and that if I hear her calling for her favorite cow in the middle of the night, "not to be alarmed." Apparently, guests had reported such incidents. She said that the deceased woman was actually very nice and that her voice in the night shouldn't concern me. Well, that is certainly not something that a person expects to hear!

As we walked in the dark, she suddenly stopped. She stared at the cabin intently and was frozen in place. I asked her if she was okay... repeatedly... with no response. She was just staring at the cabin. I then told her that I was concerned and needed her to tell me if she was okay. She eventually said, in a rather frantic voice, "I need to go home. I need to go home right now!" She turned around and started walking very quickly back to her house. I called after her, asking if she was okay. She ignored me and just kept on walking away. I headed to the cabin and immediately broke all three rules! I locked the doors, pulled the curtains closed, and turned on the porch light. I tried to sleep, but was very uneasy... and not because of a supposed ghost, but because of a clearly unstable woman who might walk in at any hour of the night.

I never saw or heard a ghost and ultimately logged my fastest mile of the entire run as I ran away from the ranch the following morning!