Where's The Beef? Sometimes It's So Close, Yet So Out of Reach! 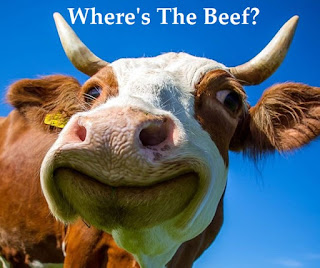 Occasionally, I write about moments during my adventure runs that are permanently etched into my memory. Today, I want to share with you a story about a Minnesota cattle ranch that I spent an evening at while on my solo run across the United States. I was about 1,700 miles into the 3,260-mile journey and was invited to stay at an Angus cattle ranch owned by a single gentleman. I had just completed a 70-mile stretch of the run within 30 hours and was ready for a big meal with a lot of calories -- particularly since I was burning more than 5,000 calories per day while running coast to coast.

The rancher met me with a big smile as I approached his property. I had a big smile too... mainly because I could see tons of cattle and knew that I was going to have a fantastic dinner that evening. My body was truly craving protein and beef was definitely on my radar. I was escorted into his home, where I showered and was then instructed to relax in the living room as he prepared dinner for us.

It wasn't long before he called out to me that dinner was ready. I walked into the dining room to find a plate of vegetables -- some of which I wasn't even sure what they were. The rancher had a proud look on his face and said, "Dig in!" I was a little puzzled by the lack of meat, bread, or some other item to accompany the vegetables... but then I thought that this must be what we'd be eating to start off the meal and a second course would be coming. I ate the vegetables and when I was done he sat back in his chair and said, "So, how was it?" I told him it was delicious as my mind was racing... wondering why there wasn't more to eat. That's when he said, "I know you runner types don't eat meat, so I went with vegetables." I was a bit in shock, and still hungry.

Somehow, this man had heard that runners don't eat meat, which is completely false. I had just eaten a plate of vegetables while looking out of a large window at a field of grazing cattle... wishing that I had beef on my plate. I thanked him for the meal, helped him clean the dishes, and then went to the room where I would be for the evening and ate three or four PowerBars because I was still so hungry and in need of calories. In the morning I was given some toast, orange juice, and a couple of pieces of fruit for the road. I ended up stopping at the next restaurant I saw and ate a meat-concentrated meal.

At least I managed to stay away from using the 1984 Wendy's restaurant catchphrase, "Where's the beef?!" As I ran away from the ranch I glanced at the cattle and could've sworn I saw a cow grinning at me as though to communicate -- 'better luck next time.'