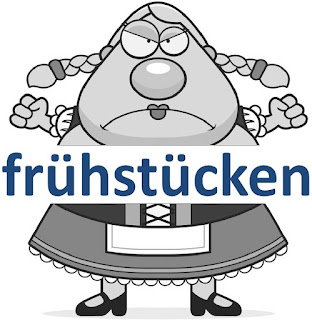 I honestly had no idea what the woman was saying! In 2010, as I was running solo across Germany, I stayed in a small village inn for an evening that was operated by an elderly German couple. I can tell you that if you ever plan to run across a foreign country where the locals do not speak English, it's a good idea to know their language! That wasn't the case for me. I knew just barely enough German to request a room for one night; to ask the location of the nearest bathroom; to order basic German cuisine; and, to understand German currency enough to pay properly. However, that was about it.

It was always an adventure to run into a small village in Germany and to enter an inn where I would stay for an evening. In this particular case, I awoke the next morning and wanted to get on the road. I had stayed in an upstairs room of a house that had apparently been converted into an inn. I came down the stairs the next morning, checked out at the desk with a smile, handed back the room key (having already paid), and turned for the front door. It was then that the large German woman quickly got in front of me and blocked my way. She began saying: "Sie müssen frühstücken, bevor Sie gehen!" -- repeatedly. I had no idea what she was saying, and I was wondering if I had done something wrong due to how adamant she was being... literally blocking the front door.

There I was, an American with a bright yellow jogging stroller, standing in the entry of a small village inn and absolutely perplexed by what this woman was trying to convey to me. Fortunately, a gentleman started to come down the stairs and I asked him if he could tell me in English what she was saying. To my good luck, he spoke English. He listened to her and then looked at me with a smile. He said, "She's saying that you must have breakfast before you can go." The woman was apparently concerned that I was about to venture out on an empty stomach. I opened my food bag and showed her that I had enough food supplies for the day, and she seemed satisfied by seeing that. She smiled and stepped away from the door, allowing me to leave.

I ran through the village that early morning feeling grateful that there are still good people looking out for others, no matter where you may be. She didn't need to feed my stomach that day, but she did feed my soul by her concern for my well being.