There I Was... in a School Bathroom with an 8-Foot Tall Grizzly Bear! 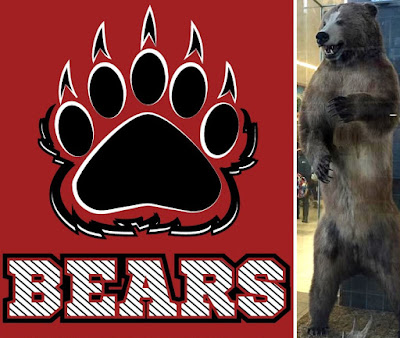 Earlier this week, I shared a story about the time I drove my car down the hallway when I was in high school. Today, I thought I'd share another story from my high school days.

As I've mentioned before, I graduated from Juneau-Douglas High School in 1983 -- that school being located in Juneau, Alaska. I really enjoyed my high school days. In my senior year I was Captain of the track and field team; Editor of the school yearbook; and, made some noise with a garage band. It was tradition that every spring someone would steal "Mac" -- the school mascot -- and then return it by the end of the school year, usually with some repairs or improvements to it. Our high school was known as the "Crimson Bears" and our mascot was an 8-foot tall mounted Grizzly bear standing on its hind legs (see photo). Today, the bear is inside of a glass display case, but back in 1983 it was secured to a rolling platform and kept in a storage closet when not on display at a sporting event in the gymnasium. In early 1983, I decided to be the Senior to 'steal' Mac and have a local taxidermist do some improvements to the bear's claws, teeth and tongue.

As I explained in my writing earlier this week about driving my car down the high school hallway, back in 1983 the school didn't have the alarm and surveillance systems that today's schools have. I simply had to figure out when to try and get into the school. On weekends, some teachers would go into the school to work on lesson plans. I decided that I would aim to steal Mac on a weekend when the school might be unlocked during the day for teacher access. Ultimately, I chose Easter Sunday -- figuring that many teachers would be with family and not in the school. I'm sure that I'll have to answer to the Lord one day for my choice, and I've been pondering that for the past 37 years. On Sunday, April 3, 1983 (the day before my 18th birthday) I went to the school with a couple of friends. One of them had a truck and parked behind the school. I went to a side door, found that it was unlocked, and went into the school -- heading for the storage closet where I knew Mac was usually kept.

I opened a door, and there it was... all 8 feet of it. I started to wheel it down the hallway for the back door where the truck was waiting. All of a sudden, a teacher appeared at the end of the long hallway and fortunately was walking slowly and looking down at papers in his hands. I had no choice but to lean the grizzly bear back onto two of its platform wheels and push it into a bathroom. There I silently stood... next to urinals with a grizzly bear towering over me. I listened for the teacher's footsteps, praying that he wasn't going to feel an urge to use the bathroom. Thankfully, he walked past and went upstairs to the next level. I then got the bear out of the bathroom, wheeled it down the hallway, and successfully got it out the door and into the bed of the truck. We covered it with blankets and took it to the taxidermist -- who was good at keeping a secret.

About six weeks later, it was time for graduation. Some of my friends and I put a graduation cap and gown on Mac and wheeled him into the commencement ceremony. It was then that everyone knew who had 'stolen' Mac. That tradition has since faded away at Juneau-Douglas High School, but I'll always have that fond memory. And yes, I was really glad that there wasn't a teacher in the bathroom when I dashed in with my tall, fierce-looking companion!