I Drove a VW Bug Down My High School's Hallway -- On The 2nd Floor! 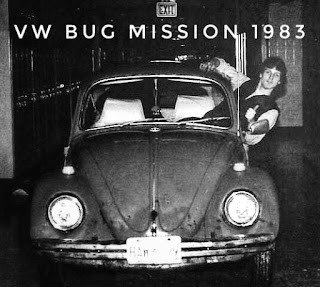 It was January 1983 when I looked down the hallway of my high school... just months away from graduating. What caught my attention was the orange color of the lockers. Surprisingly, those lockers were just about the same orange tint as the 1969 VW Bug that I drove during high school. One question came to mind -- would I be able to sneak my Volkswagen into the high school some night, drive it down the hallway, and take a photo that I could then sneak into the school yearbook? That became the "VW Bug Mission of 1983."

In order to pull off the stunt, it would require the help of three of my friends -- each sworn to secrecy. First of all, during my senior year I was the Editor of the yearbook. Back then, pictures were printed and mounted on heavy paper stock before being sent to the publishing company for printing. I knew that I would likely be able to get a photo into the yearbook without any teachers or administrators finding out. During January 1983, my high school was being renovated. It just happened that at the time I had my idea the construction workers had taken out a double doorway on one side of the school, which was slightly elevated on a hill and actually provided access to the second floor. They had a temporary covering of plywood over it. After taking some quick measurements of the doorway and my car, I decided that would be the entry point!

Since I knew that this plan could result in me, and my friends, being caught, I decided to tell my parents about the plan. They told me to be careful, to not vandalize, and to clean up any mess I were to make in the school. They would be at home... ready to answer the phone should a police officer call. I met my friends at the school around midnight... and it was very dark.

Keep in mind, this was nearly 40 years ago, before many schools had sophisticated alarm and camera surveillance systems. My high school didn't have those things. The first task was to remove the temporary plywood that the construction team had placed over the double doorway. We had brought tools to handle that task and were able to uncover the entrance. Then, I got into my VW Bug, started the engine, and drove into the school -- on the second floor. The first thing I realized was how loud the engine sounded... the engine noise bouncing off of the metal lockers. It was decided that we would push the bug down the hallway quietly and position it right in front of the Principal's office. I thought that would make a memorable photo.

My three friends and I got the car into position, took several photos, and then pushed the car back outside. We took towels and wiped the hallway floor so that no dirty tire marks could be seen. We replaced the plywood, congratulated each other, and then took off for home. My parents were relieved that it went smoothly.

I had the pictures printed and one day when the yearbook advisor was approving pages for the senior section of the book, I had in my pocket a photo of me and my buddies with the car in front of the Principal's office. Once the advisor had signed off on the pages to be mailed to the publishing company, I waited until he was back at his desk. Then, I switched out a photo to include the one from "VW Bug Mission 1983." The stunt was kept a complete secret and when the yearbooks were delivered to the students they were in for quite a surprise when they saw me and some friends with the little German car on the second floor. Of course, many questions followed. The school Principal retired that year and when he was interviewed by the local newspaper regarding his career in education he mentioned the VW Bug stunt as something he'll definitely remember. He actually gave me a pat on the back after seeing the photo in the yearbook.

Of course, driving a car down the second floor hallway of a high school wouldn't be something that today's teenagers would want to try. It would certainly result in all sorts of problems!