It Takes 10,000 Hours of "Deliberate Practice" to Become World Class 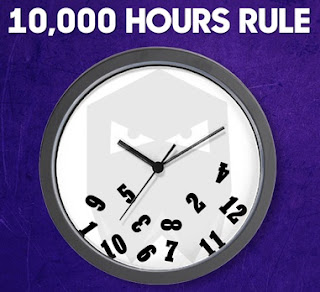 I'm sure at some point in our lives all of us have heard, "Practice makes perfect!" I know that as a child I heard that many times from teachers. What I didn't hear is that it takes about 10,000 hours of practice to become an expert in a skill. Based on the math, 10,000 hours works out to be around 20 hours per week for ten years. Ten years is a long time, but 20 hours a week isn't so bad -- especially when you consider the average American watches 35 hours of television each week.

Research shows that the overwhelming majority of experts who reach the top of their fields (for instance, Olympic athletes or great composers) have spent a minimum of ten years acquiring and honing their skills. Between the ages of 18 and 21 I had put in about 20 hours per week long distance running, giving me over 3,000 hours on the road during those three years. I was well on my way to 10,000 hours. Of course, that was 35 years ago and since then I have logged countless hours running long distances. I've written before about how I may have achieved a "world class" level and never actually knew it.

In the 2008 non-fiction book Outliers: The Story of Success, by Malcolm Gladwell, the "10,000-Hour Rule" is discussed, which claims that the key to achieving world-class expertise in any skill is -- to a large extent -- a matter of practicing the correct way for a total of around 10,000 hours. The rule was loosely based on a 1993 study of accomplished violinists in Berlin, Germany, which found that the most accomplished students had spent 10,000 hours practicing by the time they were 20 years of age -- far more hours than the less accomplished students had spent practicing. Actually, the 10,000-Hour Rule has been a topic of scientific research since I was a teenager in the 1970's. It wasn't until 2008 that author Gladwell brought the topic to the forefront of discussions on pursuing world-class expertise in a skill.

Some view the 10,000-Hour Rule as inaccurate stating that biology and genetics must also be considered when determining how long you need to practice to acquire a certain skill. In other words, one person's hour of practice isn't as good as the next person's hour. Genetics, or a person's biological setup, can allow for one person to be better than the next.

The reason most people will never achieve world-class expertise in any skill is because they're not willing to take a risk. They simply won't leave their comfort zone. If you want to become great at something you have to put yourself out there. Sure, you may fail. However, those who can learn from failures and try again -- acquiring more hours of deliberate practice -- are the ones who stand the best chance of success. Remember, along with the old saying "Practice makes perfect" is also the saying, "Pick yourself up, dust yourself off, and try again!"