I've Always Appreciated My Education From The University of Montana 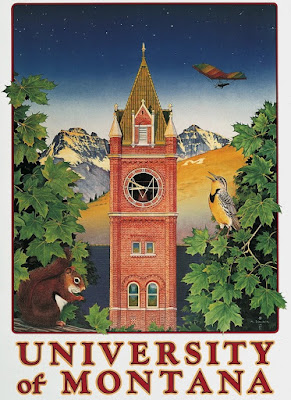 I graduated from high school in May 1983 and soon after was in Missoula, Montana to attend college. I obtained two Bachelor of Arts degrees from the University of Montana (UM), one in journalism and the other in religious studies -- costing a total of about $25,000. Today, that would only pay for one year of out-of-state tuition at UM.

The 1983 artwork that accompanies this writing is by renowned artist Monte Dolack. I've always liked how it captures the university's clock tower and surrounding nature. It is indeed a beautiful campus! In fact, Rolling Stone magazine has called it the most beautiful campus in America.

Recently, the Missoulian newspaper reported that UM has seen declining enrollment since a record high point in Fall 2011, with the current figures showing a nearly 35 percent decline in total student headcount since then. The total headcount of students, including all levels of students on the main campus, as well as at Missoula College, is now approximately 10,250. The Chronicle of Higher Education reported last autumn that UM has lost more undergrads than any other public flagship university in the country this decade. I hope things turn around and UM experiences a boost in enrollment.

UM was founded in 1893 and has turned out scores of successful graduates. Its 56-acre campus is located at the base of Mount Sentinel along the Clark Fork River. It features over 60 architecturally important buildings, parkland and a football stadium which seats over 25,000. UM's South Campus offers student housing, soccer fields, a golf course, and outdoor track facilities on a 180-acre site. Known as 'a city within a city', the UM's grounds gives students access to their own restaurants, medical facilities, postal services, banks, and even a police department. Athletics teams at UM are known as the Grizzlies.

Two of my own children attended the UM. It's nice to know that as they pursued college degrees their footsteps were placed where mine were several decades ago. I have always appreciated the quality education I received from the University of Montana. Go Griz!