Four Hutterite Men Illegally Detained and Questioned Me in Montana 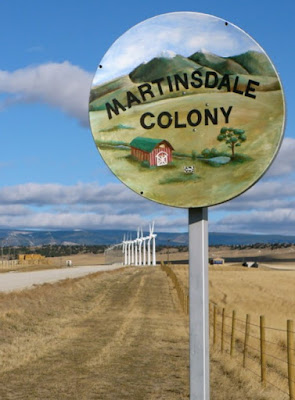 In May 2008, I was running east to west across Montana on a 620-mile solo adventure run that was being watched online by school children worldwide. I had already run across Montana two years earlier as one of the 15 states that were a part of my solo run across America. While on the 2008 journey, I had an encounter near the town of Martinsdale, Montana (population 62) that was truly unexpected... and unnerving.

I was running along U.S. Route 12 all alone -- a Montana road where you can run for a couple of hours without seeing a vehicle -- and there are very few people and residences in this section of Montana. As I was running past land known as the "Martinsdale Hutterite Colony" (which is comprised of over 15,000 acres), I suddenly heard four-wheel ATV's. Then appearing to my right and left were four ATV's quickly approaching, kicking up dust as they closed in on me. Somehow, from a distance, they saw me on the highway and decided to 'investigate' this lone runner. It was almost as if they were on watch.

They stopped me, surrounded me, and began to ask numerous questions -- however, any questions I attempted to ask went unanswered. It was a very uncomfortable moment and all they would say is that they were making sure that someone wasn't passing through that might cause trouble. Their act was simply intimidation, and belittling. A couple of them expressed some negative comments about what I was doing and were clearly aiming to make me feel uncomfortable, and outnumbered. Eventually, I was allowed to continue down the road as they watched me disappear over the next hill into Meagher County, Montana. How could the two pairs of ATV's communicated from opposite sides of the highway in order to begin closing in on me? I would later learn that the Martinsdale Hutterite Colony allowed cell phone use -- including texting. It is quite possible that since the Hutterite colony owned land on both sides of the highway, that they were on watch for any persons coming through the area outside of a vehicle. However, I WAS ON A PUBLIC ROAD!

I spent that evening at the Crazy Mountain Inn about 5 miles away from the Hutterite colony. It has always bothered me how I was treated that day by the four young men that roared up on their ATV's. It was obvious they had come from the Martinsdale Hutterite Colony -- which at the time had a population of about 150 Hutterites -- and they had no business stopping me on a public road to interrogate me. I had already completed 337 miles in 11 days on the pavement and it was not the first time I had lawfully run along the edge of the highway in the vicinity of the Martinsdale Hutterite Colony. I had done so in 2006 during my solo run across America. However, in 2006 I didn't have any encounters with people from the colony.

According to National Geographic, there are roughly 40,000 Hutterites living in approximately 500 colonies in the United States and Canada. The group is named for a 16th century leader, Jakob Hutter, who preached the tenets of pacifism and communal living. Their life is centered on faith and family. Like the Amish, Hutterites grow their own food and make their own clothes. However, unlike the Amish they embrace technology -- supposedly as long as it improves life in their colonies.

In 2008, I was a sole runner on a student-focused adventure across Montana, posting daily information to an educational website so that children around the world could learn more about Montana, fitness and pursuing goals. The four young men from the Martinsdale Hutterite Colony that illegally detained and questioned me on U.S.  Route 12 during the afternoon of May 10, 2008 had no right to do what they did. I regret not reporting the incident to police.