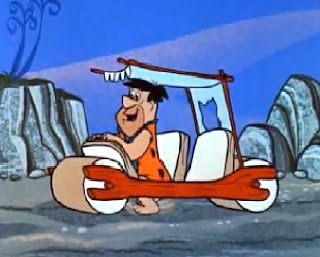 With many schools wrapping up their academic year, I've recently been recalling some moments from my high school days. Earlier this week, I shared two stories in this blog -- the first being when I drove my car down the high school hallway, and the other being when I stole the school mascot. I've decided to share one more story with you.

During my senior year of high school in 1983, I drove a 1969 VW Bug that I purchased from an elderly woman for $500. The body of the car was in fairly good condition, but it had quite a bit of rust on the underside. Regardless, I drove that orange VW to and from school in Juneau, Alaska.

One day after school, I was sitting in my car... parked in front of the high school. School had just gotten out for the day and a friend of mine knocked on my passenger window and asked me if he could get a ride home. I agreed and he opened the door to get in. What you need to know is that he stood six feet two inches and must have weighed around 230 pounds. When he sat down in the front passenger seat, the entire floorboard of the car fell to the ground! My hands were on the steering wheel and went from being in front of me to being slightly above my head. There we were... on the pavement!

My friend simply said, "Wow, sorry Paul." and then climbed out of the car. I sat there in disbelief, looking at the pavement as gathering students began to laugh hysterically. I felt like the cartoon character Fred Flintstone with a car that had no floor! I climbed out of the car, shut the door, and gave a slight embarrassed bow to the gathered crowd. Then, I went inside the school, called my father to tell him what had happened, and he drove to the high school. Together, we proceeded to use rope to tie the floor up close to the frame in order to tow it home.

I couldn't believe that the entire floor of my car had fallen out. I remember standing in our family driveway shaking my head in disbelief and pondering what to do. My father's solution was unique: cut a pattern of the floorboard out of two pieces of three-quarter-inch plywood, bolt them together, and then secure the plywood floor to the car's frame -- covering it on the inside with carpet. I must admit, I had doubts about this plan, but it actually worked. I drove the car to and from high school for the remainder of that year.

I decided to sell the car before leaving the state to attend college, and the first guy that test drove it decided to buy it. As I watched him drive away I was once again shaking my head, because he never looked under the car when he was inspecting it. I hope he never got termites!