Cohabitation Before Marriage Is Gaining Popularity -- But Is Still Wrong. 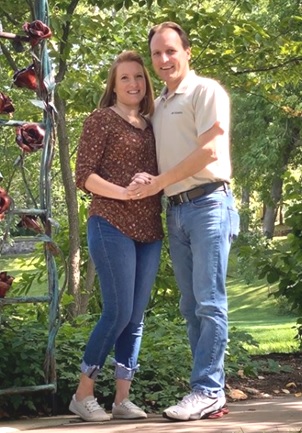 My wife and I love to spend time together. In fact, I find myself looking at the clock during the work day anticipating the time that I get to drive home to her. My courtship of Kelley is a never-ending part of my life. It started during the summer of 2015 when we met, and it continues today. We dated for 15 months before I proposed to her, and then were engaged for nearly two years before getting married. I loved courting Kelley during those initial years of being together. For those of you who don't know what "courting" is, it is about committing to a woman and the relationship with a view to making it a solid, loving and lasting one -- unlike dating, which is a step beyond friendship, but not to the commitment level of courting.

I recently read an article where the wife in a three-year marriage had this to say: "We had been living together for so many years before we actually got married, it didn’t feel like much of a shift. To be honest, the wedding was just for fun." Did I read that right? The wedding was just for FUN? Oh my! That couple missed out on a huge part of a genuine engagement and a meaningful marriage ceremony. Unfortunately, more young people are choosing to live together before becoming engaged or getting married. They seem to think that living apart until marriage is a somewhat antiquated notion, and that morals have somehow shifted to approve of living together before the bonds of matrimony.

My wife and I did not cohabitate (live together) before marriage. We knew each other for 3 years and 2 months before we exchanged our wedding vows, and during all of that time we lived in different towns -- actually, different counties. I drove 30 miles round trip every day to spend time with her. Overall, I drove about 35,000 miles to 'court' her before saying "I do." I look back on those days and am so grateful for that experience. Each day she saw me pursuing her... making an effort to get to her... and kissing her goodnight and anticipating the next time that I would be able to see her. Those feelings are still happening. I look forward to getting home to her each day and am thankful that we both stayed true to our faith, our morals, our commitment to not live together before marriage.

I'm a Catholic man and cohabitation before marriage is considered sinful by the Catholic church. So, why do people move in together without being married? It’s because they haven't made a commitment to each other yet, but they want to try out if they would like to get married. In other words, cohabitation is enjoying the benefits of marriage without the commitments. Either person can walk away at anytime without a legal obligation. And, if the cohabitation was done in secret then neither has to answer to their family or church on the matter. It's like trying on shoes before buying them, but choosing to walk out in them without paying.

The Catholic News Agency released an article by the Bishops of Pennsylvania regarding the Church's moral teachings with respect to cohabitation, engagement and marriage. In it, the Bishops state:


"Couples living together before marriage: while many in our society may see no problem with this arrangement, living together and having sexual relations before marriage can never be reconciled with what God expects of us. In addition, countless studies have shown that couples who live together before marriage have higher rates of divorce and a poorer quality of marital relationship than those who do not... we urge all engaged couples who are living together to separate. All Catholics should seek to be reconciled with God and the Church by going to confession and by going to Mass and Holy Communion regularly... the Church is particularly concerned about cohabitation because the practice is so common today and because, in the long run, it is causing great unhappiness for families in the Church. This is true, above all, because -- even though society may approve of the practice -- cohabitation simply cannot be squared with God's plan for marriage. This may be why most couples who live together before marriage find married life difficult to sustain for very long. The Church does not invent laws. It passes on and interprets what God has revealed through the ages. No one in the Church has the right to change what Jesus has taught. To do so would be to deprive people of saving truths that were meant for all time."

The Bishops go on to say that most couples don't really evaluate the reasons they give to justify their decision. This is what the Bishops have to say about it:

Reason 1: "It's more convenient for us."
"Convenience" is a good thing, but it's not the basis for making a decision that will affect your entire life. Married life is sometimes inconvenient and even demanding. Cohabitation for convenience is poor preparation for that kind of commitment. Research bears this out. Studies show that those who live together before marriage tend to prefer "change," "experimentation" and open-ended lifestyles -- all of which could lead to instability in marriage. One study, conducted by researchers at the University of Chicago and the University of Michigan, concluded that couples who cohabit tend to experience superficial communication and uncommitted decision-making once they are married. Cohabitation for convenience does not allow for the careful thought and adequate "space" necessary for making wise life decisions.

Reason 2: "We're trying to save money for the wedding, so living together is more economical."
Sure, you might save the price of monthly rent, but you're sacrificing something more valuable. Engagement is more than just time to plan the party. It is a time for deeper discussion and more thorough reflection, which are best carried out in a detached way. Couples who are living together do not have the luxury of such detachment. So whatever expenses you save, you'll likely pay more in the end. Dr. Joyce Brothers said it well in an article on cohabitation: "short-term savings are less important than investing in a lifetime relationship."

Reason 3: "Because of the high divorce rate, we want to see if things work out first."
Studies consistently show that couples who live together score significantly lower in both marital communications and overall satisfaction. On the surface, a trial run at marriage may seem to make sense, allowing one to screen out less compatible mates. But it doesn't work out that way. Couples who live together before marriage actually have a 50 percent greater chance of divorce than those who don't. And about 60 percent of couples who cohabit break up without marrying. Living together before marriage is different from living together in marriage, because there is no binding commitment to support the relationship.

Reason 4: "We need to get to know one another first. Later we'll start having kids."
Cohabitation is actually the worst way to get to know another person, because it shortcuts the true development of lasting friendship. Those who live together before marriage often report an over-reliance on sexual expression and less emphasis on conversation and other ways of communication -- ways that ultimately lead to a more fulfilling sexual union after marriage. Traditionally, the process of dating or "courtship" has led couples to a deeper appreciation of one another through conversation, shared ideals and dreams, and a mutual understanding of one another's values.

Reason 5: "The Church is just outdated and out of touch with its thinking in this matter. Birth control made those old rules obsolete."
That's just not true. In the early days of the Church, living together outside of marriage was common among the non-Christians in the Roman Empire -- as was the use of artificial contraception. But these practices were devastating for individuals, families, and society. Women were treated as disposable objects, mere toys for sexual pleasure, to be discarded when passions waned. The Christian vision of marriage and family led to happiness and fulfillment for individuals and families -- and a great renewal of culture and society. Far from being outmoded, then as now, the Church's teaching is revolutionary, and it works!

The Bishops go on to say:


"Just because everyone does something doesn't make it right or any less serious. A couple's choice to live together is not simply made in isolation. It affects everyone in relationship with these two people -- parents, brothers, sisters, friends, and even other members of the parish. A cohabiting couple implicitly communicates that there is nothing wrong breaking God's law. This can be especially misleading to young children -- nieces, nephews, and children of friends -- who are impressionable and whose moral reasoning is immature. The Church's teaching on cohabitation is not an "arbitrary" rule. Living together before marriage is a sin because it violates God's commandments and the law of the Church. St. Paul lists this sin -- technically called "fornication" -- among the sins (whether within or outside cohabitation) that can keep a person from reaching heaven (see 1 Corinthians 6:9) Cohabitation works against the heart's deepest desires and greatly increases the chances of a failed marriage. If you are honest with yourself, every practical consideration will tell you that separating before marriage is the right thing to do. It is a decision to turn away from sin and to follow Christ and His teaching. That is always the right decision. But it's a good decision for other important reasons, too: (1) it will strengthen your marriage; (2) it will deepen your friendship; (3) it will foster deeper intimacy and communion; (4) it will build up your problem-solving and communications skills; (5) it will give your marriage a greater chance for success. You may think you are unique and that your passion for each other will never wane. But that's what most couples think. No one goes into marriage planning for a breakup; yet a majority of couples today do break up. You want to be one of the exceptional couples who not only succeed in marriage, but also live together in happiness and fulfillment."