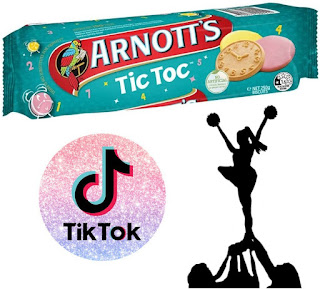 In Australia, "Tic Toc" biscuits are well known for their clock faces that help children learn to tell time. In cheerleading, a "Tick Tock" stunt is when the flyer switches legs -- from a right leg liberty to a left leg liberty. Then, there's the "TikTok" that has been making headlines in the past year. I'm talking about the video-sharing social networking service originating out of China. TikTok was launched in 2017 for iOS and Android in most markets outside of mainland China; however, it only became available worldwide (including the United States) after merging with another Chinese social media service in August 2018. Since then, it has gained worldwide popularity -- particularly among young people. In fact, 41 percent of TikTok users are between 16 and 24 years of age, and 49 percent of all teenagers say that they use the app. A survey of users show that 90 percent of TikTok users access the app multiple times per day, and it is used more by females than males.

You've likely seen the news reports that experts have been split on the question of whether or not TikTok poses a security risk (user privacy concerns), with some saying that it does while others say that it does not. Earlier this month, TikTok filed a request for a preliminary injunction to prevent the app from being banned by the President of the United States. Recently, the preliminary injunction was approved.

There are addiction concerns surrounding TikTok. In April 2018, an addiction-reduction feature was added to the app -- encouraging users to take a break every 90 minutes. There have also been concerns raised regarding users' attention spans with the videos. Generally, users watch short 15-second clips repeatedly and studies say that this could decrease attention span. This is particularly a concern since many of TikTok's audience are younger children, whose brains are still developing. Also, many countries have showed concerns regarding the content of TikTok, which is viewed by some to be obscene, immoral, vulgar and encouraging of pornography. This has caused temporary blocks and warnings issued by some countries.

Several users have reported cyberbullying on TikTok, including racism and ableism. Ableism is the discrimination of and social prejudice against people with disabilities based on the belief that typical abilities are superior. In December 2019, TikTok admitted that it had suppressed videos by disabled users as well as LGBTQ+ users in a purported effort to limit cyberbullying. TikTok's moderators were also told to suppress users with "abnormal body shape," "ugly facial looks," "too many wrinkles," or in "slums, rural fields" and "dilapidated housing" to prevent bullying.

There are currently 7.8 billion people in the world. Last month, TikTok revealed that it has about 800 million active users globally, with 100 million monthly active users in the United States. TikTok says that the app has been downloaded about 2 billion times worldwide. Currently, it is the most downloaded app on the Apple App Store.

I've never seen the TikTok app... never used it... never downloaded it... and simply don't have time to watch short video clips of strangers from around the world. I can find far better use of my time than watching people do dances, stunts and aim for momentary social media fame. Remember TikTok users, the clock is ticking... tick tock... and you won't ever get that time back of watching random people do a dance step, a prank, or striking a pose for attention.