Every Mountain Top is Within Reach if You Just Keep Climbing 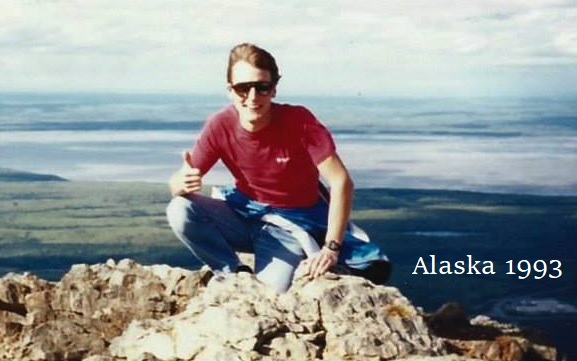 I grew up in Alaska and truly enjoyed skiing, hiking and exploring different areas. This photo was taken in September 1993 when I was 28 years of age. At the time, I was working in a law firm and on the weekends I would climb mountains around the communities of Anchorage and Eagle River to clear my head and to spend time in nature.

Author and climber, Barry Finlay, wrote: "Every mountain top is within reach if you just keep climbing." That's a true statement, and it doesn't just apply to mountains. When I ran solo across America from the Pacific Ocean to the Atlantic Ocean, I knew that I could reach my goal -- the Atlantic shore -- if I just kept putting one foot in front of the other. After 108 days, I conquered that 3,260-mile distance. I've definitely covered more miles horizontally than I have vertically. Climbing was a hobby prior to age 30. It wasn't something that I poured a lot of time or money into, likely because I became a father at the age of 28. It wasn't long until I had four little kids running around my legs and as a result I had enough mountains to climb in my everyday life with balancing a full-time job and being a father to four children.

As most know, Mount Everest is the earth's highest mountain above sea level. It is 29,029 feet high (about 5 1/2 miles) and has taken the lives of at least 311 people. However, a study released last week states that climbers tackling Mount Everest are twice as likely to make it to the summit (and slightly less likely to die) than two decades ago, despite a sharp increase in crowding in the so-called "death zone" -- which is a narrow route just below the summit. Last year, 955 people attempted to reach the summit of Mount Everest. Climbers have expressed concern that Nepal was issuing permits to anyone willing to pay the $11,000 fee. Now, Nepal plans to change climbing rules and make guides, fitness and experience of climbing a lower mountain mandatory for Everest to raise safety levels.

Climbing the highest mountains is not on my bucket list for life. I applaud those who dedicate the time and resources to be able to take on such feats and to see such amazing sights. However, with all of the miles I've run across states and countries, I'm more content these days to have a slower pace and to enjoy the ground that is under my feet -- no matter where I am. I will always prefer the mountains more than the beach, trees more than prairie, and rivers/lakes more than windswept plains. I grew up in the mountains and lived most of my life near them. These days, I'm surrounded by cornfields in America's heartland and although it wasn't immediate, I eventually found the beauty in the rolling hills, the blowing tassels at the top of the cornfields, and the sun setting on a generally flat horizon. God's creation is filled with beauty, from the lowest valley to the highest peak. Every time I ponder that and give thanks in my heart... I'm standing on the highest peak.