Seeing America From Behind a Jogging Stroller 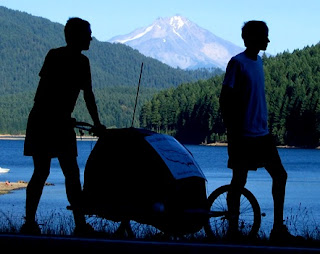 In 2005 (just one year before I ran across America solo), two 19-year-old runners decided to take on an epic adventure of running across the United States without a support team. Their names were Brandon Newlin and Matthew Wyble and they were both cross country runners in high school (Wallace, Michigan). Both had grown up together, stood about 6'4" tall, and came into this world when I was a junior in college. Their run was actually quite similar to a 2003 run across America by Scott Sehon and Dave Bronfenbrenner -- two guys who were in their 20's and also ran across America together using a stroller as their only means of support.

Like Dave and Scott two years before them, Brandon and Matt decided that they would also push their gear across America in a jogging stroller, sharing the duty of pushing it. They ran from the New Jersey shore to the coast of Oregon, a total of 3,248 miles -- just 12 miles shorter than the route I ran alone in 2006. I didn't learn about their run until the autumn of 2005... about 8 months before I began my U.S. crossing. The idea of pushing a stroller appealed to me and became the method I would use to accomplish a solo run across the country. Aside from the stroller and the running elements, there wasn't much similarity between Matt, Brandon and myself. They ran across at 19 and I was 41. They were fresh out of high school and I was the father of four children operating my own business. And yes, they were six inches taller than I.

Before their coast-to-coast run began, Matt was asked to share his greatest fear about the undertaking. He said, "We'll be raped, murdered, or run over. Or that someone will think we're a gay couple out for a walk with our adopted baby in the stroller. Or that Brandon and I will kill each other after a month of being together 24/7. Or that we won't make it, making complete jerks out of ourselves." Brandon responded by saying, "Getting out there and finding out that it’ll be impossible for us to make it and discover that everyone is right. My other fear is getting about 100 miles from the Pacific coast and having Matt die or something. Would I drop him off and come back for him? Or would I put him in the stroller and go the rest of way? Decisions, decisions." They were certainly two young guys with a sense of humor!

Before taking on any adventure, fears will certainly surface in the quiet moments as you sit and think about what it is that you are about to attempt. I had some fears as well. I feared being injured and alone somewhere, being killed by an inattentive motorist, and being caught in an incredible storm all alone with no shelter. I -- like Brandon and Matt -- just kept putting one foot in front of the other... overcoming the occasional obstacles... and eventually reached the finish line. Thomas Carlyle once said, "Endurance is patience concentrated." It takes great patience to run day in and day out across a continent for months, enduring all kinds of weather, terrain and encounters with wildlife and people. Sometimes fears are realized, but many times the pre-adventure fears never actually occur. I'm fortunate to have made it across America -- as did Matt and Brandon.

Since I completed my U.S. journey 14 years ago, I've read about several people who have walked and/or run across the United States using a stroller for their endeavors. It has truly become a popular way for crossing the continent without the need for a support vehicle.