"Guy" vs." Gentleman": Ten Tips on How to Make a Guy a Gentleman

There have been several times that I've shared in this blog my thoughts about men being gentlemen, including: 20 Things That Make a Man a Gentleman and Some Say Chivalry Is Dead. I Don't Agree, But It Needs Strengthening! I recently saw an article titled Turn Your Guy into a Gentleman and it caught my attention because it seems that there are fewer articles these days about being a gentleman. This particular article contained ten tips for ladies who want to turn their guys into gentlemen. In the article's introduction it states: 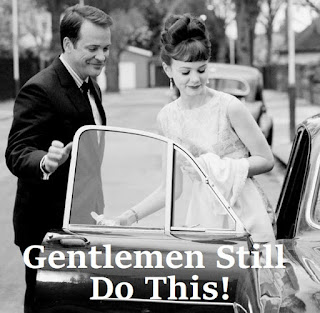 "Three hundred years ago men were gentleman by nature. Even the art of war was gentlemanly. To be honest, men were still gentlemen in the 1950's. Society has changed a lot over the past few decades, and while some of those changes have been wonderfully helpful to women everywhere... some of those changes have not. The fact that men don’t feel the need to be "gentlemen" anymore is definitely not a good change."

I'm not a woman, but I agree with that statement. It does seem that a majority of men don't feel the need to be "gentlemen" anymore. This particular article -- yes, written by a woman -- provided ten tips for turning guys into gentlemen and I wanted to share it with you today.

1. Force Him to Dress Up
You have to put your foot down and make him wear nice clothes. Okay, he might not be willing (or possibly even capable) of looking like he stepped right out of a J. Crew catalog, but he should at least own pants without holes and shirts that aren’t flannel. When he tries to go out with you looking like he just stepped out of a hard rock concert, tell him he has to change his clothes or go on without him. Don’t accept his terrible wardrobe, and if he doesn’t have anything good then you might have to go get him something.

2. Wait for Him to Open the Door
Don’t walk in front of him, walk beside him and make sure he opens the door for you. Pause in front of the door and smile at him sweetly and ask if he’ll open the door for you please. Start out doing this when your hands are full and then eventually he’ll start opening the door even when you’re hands are free.

3. Remind Him to Say Please
If your guy is the kind to say “Honey, grab me a sandwich, will you?”, then take it upon yourself to make him into more of a gentleman by telling him to “say please.” Do it in a cute, teasing manner the first few times, then smile and lift an eyebrow at him until it just becomes second nature to the man.

4. Remind Him to Say Thank You
Getting a man to say thank you is a little different, usually it takes trickery. I don’t recommend forcefully reminding your guy to say thank you until he’s reached the point of using the above manners automatically, and then you shouldn’t tell him to say the words, you should remind him that you would “just like a little appreciation once in a while for all the things you do for him.”

5. Hold Fancy Dinner Parties
If you want to bring out the best in your man, you have to show him some gentlemanly examples. Host some serious dinner parties with your friends where your man has to dress his best and can be around other guys who are on their "best behavior."

6. Go to Nice Places
Going out for pizza every night is always the easiest dinner option (and you don’t have to dress your best), but every once in a while force your man to show his gentlemanly side by making him dress up and take you out for a fancy dinner.

7. Be the Example
You can’t exactly turn your man into a gentleman by not being a lady. Show him your best side too by practicing the same rules. Say please and thank you, dress up for an evening out to dinner, and be the lady every gentleman deserves. This works both ways.

8. Don’t Reward Bad Behavior
If your guy is sitting around belching and eating with his fingers, then you can’t exactly change his manners if you’re laughing it off. Don’t make light of his bad behavior, because it will only encourage him to continue his old habits.

9. Don’t Accept his “It’s a Guy Thing” Excuse
One of the most common excuses men use for bad behavior is “It’s a guy thing.” Okay, I’ll admit, there are definitely some “guy things” out there, but being rude and obnoxious is not one of them. Your man is quite capable of being a gentleman, with very little work, if he really wants to be one. If he doesn’t want to be a gentleman then you’ll know how he really feels about you. All men want their women to love and respect them, and if he’s a real man who really loves you then he’ll be the gentleman you deserve.

10. Appreciate His Good Gestures
Just as much as you don’t want to reward bad behavior when trying to turn your man into a gentleman, you also don’t want to forget to appreciate when he’s genuinely trying to do the right thing. He won’t get it perfect for a while, but you need to encourage and appreciate him by saying thank you to him for holding the door open, or for refraining from talking your best friend’s guy into a belching competition during that fancy dinner party. Admire him when he’s dressed nice for you and genuinely show him how much you appreciate his gestures. Your man will be a gentleman in no time!

So, there you have it. A list of ten tips for turning a guy into a gentleman. I primarily learned my manners and gentlemanly traits from watching how my father treats my mother -- and they've been married for 66 years. I notice when other men open a car door for their lady, when they help her on with her coat, or when they are dressed nice and clearly focused on the woman they're with. Sadly, it's becoming a less frequent sight in today's world. I hope that my sons will always be a gentleman with the women in their lives and that their example will be seen, and perhaps mirrored, by other men that they know.