Feel the Calm or Listen to the Chaos... the Choice is Yours to Make! 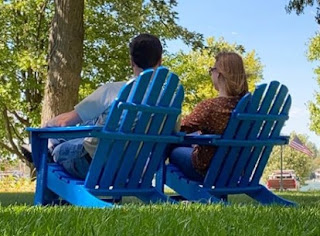 2020: the Coronavirus pandemic... protests for racial justice... social injustice... the race for U.S. President... raging wildfires... devastating storms... national economic decline... record job loss... crashes... explosions... floods... and the list goes on and on. This has certainly been a challenging year so far. According to a poll conducted by the Kaiser Family Foundation, Americans are currently the unhappiest they've been in 50 years. Only 15 percent of Americans report feeling "very happy" right now, the lowest amount since the 1970s.

In 1348, the Black Death took its grip on Europe. The disease spread quickly along the Silk Roads and then across the trade routes crisscrossing the Mediterranean. In the space of 18 months, it killed at least a third of the population of Europe. Many historians have said (before 2020) that the year 1348 was the worst year in history. Although 2020 is not done yet, I believe it will go down in history as one of the worst.

I'll admit that at the start of the COVID-19 pandemic I was watching the news frequently for updates, even receiving state/local updates on my phone. However, I soon realized that was not good for my mental health. As most people know, excessive news consumption causes stress. According to a 2017 survey by the American Psychological Association, respondents who kept up with the news cycle reported that they lost sleep; felt more stress; experienced heightened anxiety; felt more fatigued; and, experienced other negative mental health symptoms. The same survey found that as many as 20 percent of Americans constantly monitor their social media feeds for updates, and one in 10 check the news every hour. I am not one of those people! These days, I will scan Yahoo News in the morning and watch a half hour of TV network news in the evening. That's the extent of my monitoring world happenings.

Since I was born in 1965, I've seen a lot of unrest in the United States. Ten U.S. Presidents have been in office during my lifetime and I've seen society at its worst and at its best. It's simply not healthy to throw your mind and emotions into negative news frequently throughout the day. It's important to have a healthy balance in all areas of life, even when it comes to staying current with world happenings. Recently, my wife and I spent a relaxing day at a lake -- the breeze blowing off the water as we reclined in blue Adirondack chairs. It was peaceful and calming. Moments like that can do a world of good for a person's mental health and well being. It's important to carve out such moments regularly, particularly in today's world filled with stress and troubles.

Today, find a moment to turn off all of the electronics and experience the benefits that come with having a peaceful moment. Listen to the breeze... watch the birds... look up at the clouds... or just close your eyes and feel the sun's warmth. Take time to listen to and feel that part of the world that so often gets drowned out by the chaos in society.