National Parks, Preserves and Forests... and Everywhere In Between! 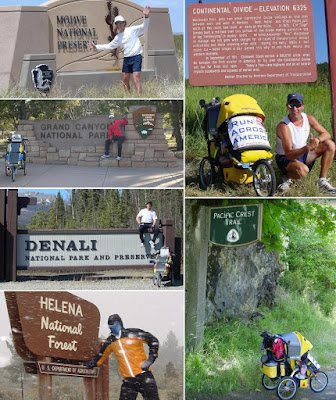 During my running career, I've been fortunate to be able to run in national parks, national preserves, and national forests around the United States. I've seen sights in my running shoes that many runners won't in their lifetime. I aimed to take pictures along the way and now have a wonderful scrapbook of memories from those times.

I was recently looking through many of the photographs from my various adventures and what I saw was a guy who was completely alone 99 percent of the time. My eyes took in some of the most beautiful, most strange, most desolate, and most breathtaking sights as I pounded out the miles. The photographs capture what my eyes saw... often as I stood alone in whatever the elements were that day -- heat, rain, sleet, snow. There were certainly times when I saw things that I wish I could have shared with someone. Many times, I would just talk to God. He created the natural surroundings that usually captured my attention and I was always so thankful for the opportunity to see such sights in such solitude.

Perhaps in my retired years my wife and I will travel together and see some of the sights that I first encountered all alone while running the back roads of America. For now, I'll just run home to her each day from the office, hold her in my arms, and thank God (as I do daily) for bringing my footsteps to her. After seeing some of the most amazing natural sights in America, it's a blessing beyond measure to be able to go home to the most beautiful woman in the world.

Click here to view photographs from my running adventures.