A Montana Governor and a U.S. Senator Who Wouldn't Shake My Hand 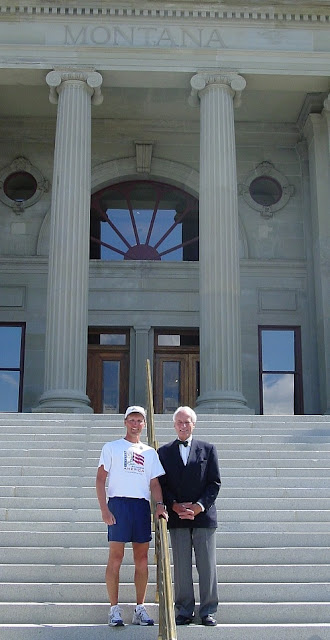 It was July 25, 2006. I had run 778 miles in 28 days and stood just a few feet outside of the office door of Montana Governor, Brian Schweitzer -- and he would not come out of his office to shake my hand. At the time, I was running solo across America to keep a promise I had made to some Montana elementary children. The governor's office knew that I was scheduled to be there at 4:00 p.m. on July 25 and I was told that I would meet Governor Schweitzer and Lieutenant Governor John Bohlinger -- both of whom had supposedly been aware of what I was doing and why I was doing it.

Upon arrival at the capitol building, I was told that Governor Schweitzer would not see me... even though I was literally a few feet outside of his office door. He was "occupied," as I was told. Instead, Mr. Bohlinger met with me alone and offered congratulations on the endeavor I was undertaking (he and I are in the accompanying photo).

At the time of my visit, Schweitzer had been in his role of governor for about 18 months. He stated to the press and voters that he was supportive of childhood education and prior to my visit had signed into law "Indian Education for All" funding. In fact, he invested more in both K-12 and higher education than any previous administration. On July 25 -- just outside of his door -- stood a 41-year-old man, a former elementary teacher, and a father of four children who was running across the United States to keep a promise he had made to 96 elementary students in Montana after they successfully completed a running and learning challenge that encompassed the entire school year. However, he would not open the door to shake my hand.

On the day that I arrived at the Montana capitol, Governor Schweitzer had given out the Governor's Efficiency Award for State Employees. He awarded framed palladium medals to three employees of the Department of Labor and Industry Business Standards Division's Board of Realty Regulation. The reason for the medals? These three employees had scanned documents onto compact disc, exercising -- as he stated in a press release -- "a conservation measure that saves trees and money." I guess keeping a promise to some kids by running 30+ miles alone every day across the country doesn't compare to scanning documents to CD.

That would not be the only time an elected politician didn't meet me as scheduled. When I ran into Washington D.C. during that coast-to-coast run, I was scheduled to meet Montana Senator Max Baucus -- who was supposedly aware of my undertaking and a fellow runner (in 1979, he became the first U.S senator to finish a marathon). At the time I had arrived in D.C., I had run 3,182 miles and was only 78 miles from the finish line. However, upon my arrival at the U.S. Senate building I was told that the Montana senator wouldn't be meeting me.

I didn't run across the country to meet politicians or influential people. I ran across to keep a promise. That I certainly accomplished!