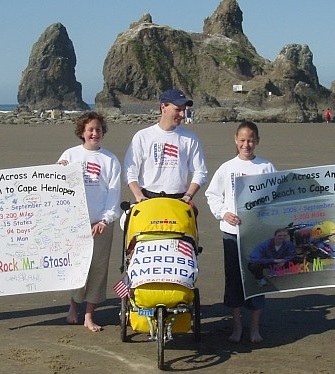 Yesterday, I read at the Runner's World magazine website -- at the top of their news page -- that a man plans on bear-crawling the 26.2-mile marathon distance. A lengthy article, complete with photos and a video, were included. However, in 2006 when the editor of Runner's World magazine's youth edition learned of the Russell Elementary students' virtual run across America (and my promise to do the run for real if they succeeded), she pitched it to the magazine's lead editors for a full-featured story. She later contacted me and reluctantly shared that the senior editors told her it was a "non-story." I couldn't believe it.

Two individual fifth grade classes of 48 students each virtually raced each other over 3,000 miles across the United States by logging miles at school... over the course of 9 months (nearly 3 marathons per child)... becoming the first classes in the U.S. to document such an accomplishment... and I (as promised) set out to run their actual route for real over the course of 108 days on the pavement alone... and all of that was considered a NON-STORY in the eyes of the Runner's World magazine editors in 2006. Yet today, 14 years later, they run an in-depth story about a guy who wants to bear-crawl a marathon. I simply shake my head in disbelief.

By definition, a non-story is information that is of no importance or of no interest to anyone. Unfortunately, the 2006 editors at Runner's World magazine felt that the accomplishment of those 10- and 11-year-old students wasn't interesting and that its readers would not be intrigued or inspired by what the young runners did... or my stepping out to keep a promise by actually running the 3,260-mile, 15-state route. In the past 14 years since, I have yet to read any story like it.

Before Runner's World magazine called the students' accomplishment and my promise a "non-story," I had subscribed and read the magazine since 1977. However, I am no longer a subscriber.