My Mom's Photo Playground Has 3 Million Lakes and 100,000 Glaciers 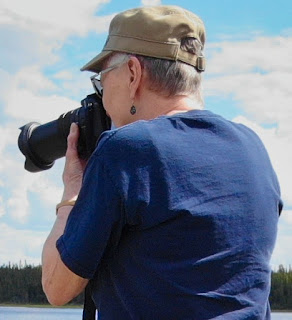 My mother, who is in her 80's, is an amazing photographer! On her Flickr account -- where she showcases her photos -- she includes a very brief bio, which reads: "I was born in the middle of upstate New York, on a cold blustery January day. I have lived in Trinidad BWI (down near the equator), Colorado, Arizona, and finally in my beloved state of Alaska. I have lived up here since 1976 residing in Eagle River, Anchorage, and Juneau. I currently live in "bush" Alaska, about 180 miles NE of Anchorage. My neighbors are the animals that call this boreal forest their home. I have traveled all over Alaska and have never tired of it's unique beauty. I want to thank everyone for their views, comments, and fave's on my images. It is all of you who inspire me to be a better photographer."

There is so much more that my mother could have written. However, she is not a woman of written words, but instead uses photography to convey what she finds interesting and beautiful about her home state of Alaska. Recently, her photographs reached well over 11 million views online -- and several of her images have been published in magazines and calendars. Her favorite photography comment is: "The single most important component of a camera is the 12 inches behind it."

Alaska was officially proclaimed a part of the United States on January 3, 1959 -- only six years before I was born. I grew up there and from the time I was a small boy I remember my mother taking photos. She would capture family vacations and scenery, having those images placed onto slides -- which we would often view during family photo nights.

Alaska accounts for more than 17 percent of the land area in the United States. Of the 20 highest mountain peaks in the U.S., 17 of them are in Alaska. There are more than 3,000 rivers and 3 million lakes in Alaska, with the largest one being Lake Iliamna -- which is 1,000 square miles. Alaska has about 100,000 glaciers, covering 5 percent of the state, and more than 100 volcanoes. It's the largest state in the union... twice the size of Texas! In Alaska, there is approximately one bear to every 21 people. This is the playground where my mother does her photography.

I am so proud of my Mom (yes, you can be proud of your parent!) for the way she has shared Alaska with people who will never have an opportunity to visit that beautiful and rugged state. She has invested her time, talents and heart into capturing Alaska's unique and wild scenes through the lens of her many cameras. The locations, events and people of Alaska that she has frozen in time through her photographs will always be cherished by myself and many others.