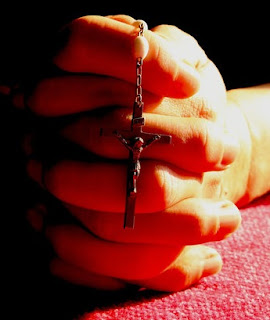 For those of you who are not aware, I recently completed the process of stepping from a Protestant life to becoming Catholic. I was confirmed on June 28, 2020. Prior to that, I had been a Baptist for 43 years. In some recent communications with certain Protestant friends and family, the topic of my entering the Catholic church has arisen. What I'm often hearing is, "I'm happy you're happy." Those words have been echoing in my heart.

First of all, I am in a very small fraction of adults who make the switch from being a Protestant to a Roman Catholic. In fact, Pew research has shown that only about two percent of the adult population does that. Protestants and Catholics worship the same God, but the principles of their faith are different. Over 500 years since the the Reformation began, there are still divisions between Protestants and Catholics.

So, now I am in Full Communion with The Roman Catholic Church. My faith has grown and matured over the years -- from the time I became a Baptist on May 1, 1977 at age 12 until the time I was confirmed in the Catholic church on June 28, 2020 at age 55. So much transpired in my life during those 43 years. Those who have only known me as a Protestant are still trying to wrap their minds and hearts around my being a Catholic. I understand that. I really do, and I can only pray that they will accept it. No, I don't expect them to agree with everything that I believe in my faith, but I do hope that they will respect my choosing to believe what I believe.

Getting back to the statement "I'm happy you're happy" -- when someone says this I believe they mean that they are truly happy for a another person's happiness, even if they don't have something to gain from what is making that person happy. Essentially, the person making the statement recognizes that the situation the other person finds themselves in is bringing them joy and they are acknowledging that person's experience. There have been some who have added, "... although I would never become Catholic!" They could have decided to place the period after "I'm happy you're happy" and leave it at that, but apparently felt the need to make their Protestant position known.

From fellow Catholics I've received many kind words, such as: "Welcome home!" and "Glad you've joined our church family." I've been deeply touched and blessed by Catholics who have been so welcoming to me.

Research suggests that people who come into contact with happy people tend to be happier. This research came from Harvard and U.C. San Diego which polled 4,700 individuals over the course of 20 years. The results suggest that simply knowing someone who is happy can boost the likelihood that you will be happy by 15 percent.

I am happy to be Catholic, and I hope that somehow boosts the happiness of those who know me.