She Approached With Tears in Her Eyes... Gripping Her Shopping Cart 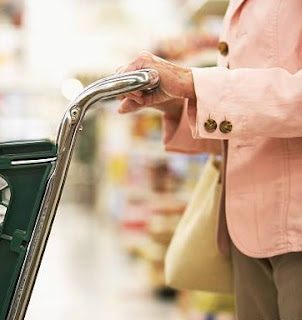 Last weekend, my wife and I were grocery shopping with my two youngest stepdaughters -- ages 12 and 15. At one point, my wife walked over to the meat counter to have some chicken packaged while I took a stroll down the cereal aisle. When I went back to her, I put my arm around her and gave her a little kiss... something that I like to do no matter where we are. We proceeded with our shopping and about three minutes later an elderly woman approached us in the canned foods aisle.

She told us that she saw me walk up to my wife in the middle of the busy grocery store and give her a kiss. As her eyes filled with tears and her voice began to break, I could tell that she was quite emotional. She told me to never stop showing my wife affection and that I need to tell her daily how much she means to me -- no matter where we are. She expressed how wonderful it was for her to see me walk up to my wife and give her a kiss while shopping.

As tears fell from her cheeks, she told us that her husband had taken his own life just four months earlier and that she misses him greatly. When she saw me give a moment of affection to my wife, it touched her deeply and made her miss him even more. My wife and I didn't know what to say. It was certainly an encounter that you don't anticipate in a busy grocery store on a Saturday afternoon. The elderly woman looked at both of us and said that we need to always cherish what we have. Then, she walked away.

I looked at my wife and we both had tears welling in our eyes. My stepdaughters were quite surprised by what they had just witnessed, and I believe it was valuable for them to experience it. We continued with our shopping and I knew that the encounter with the elderly woman would be a moment that I'd never forget.

The New York Times recently reported on a growing trend among older Americans as a result of the Covid-19 pandemic -- lives stripped of human contact, meaningful activity, purpose and hope that things will get better. Since late February, the stories from nursing homes and assisted living facilities have been appalling: people dying of neglect; people starving to death; defeated people lying in bed or staring out windows with no hope of reprieve; people with dementia fighting restrictions they cannot understand and being sedated for behavioral issues, sometimes to the point of becoming bed bound and unable to eat. Assisted living facilities are reporting that more residents have symptoms of depression and suicidal thoughts.

Suicide is the 10th leading cause of death in the United States. Last year, National Public Radio reported that men who are 65 and older face the highest risk of suicide, while adults 85 and older (regardless of gender) are the second most likely age group to die from suicide. Research has found that one out of four senior citizens that attempt suicide dies.

I am praying for the woman that my family and I encountered in the grocery store last weekend. She is truly grieving and we all need to be aware of the emotional, mental and physical issues that senior citizens face.