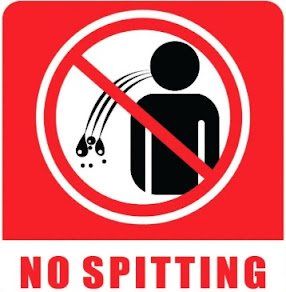 I'd like to say that I've only been spit on once in my lifetime, but unfortunately that isn't true. I can say that there is only one time that I was deliberately spit upon while I was out running -- and that was in the state of Montana as I was crossing the country during my run across America.

On July 24, 2006 I ran a 30+ mile segment of that coast-to-coast run, the location being from Helmville to Elliston, Montana. At the time, Montana was my home state and I was running to keep a promise I had made to 96 elementary children who attended a Montana school. Montana media had reported on my run and if there was anywhere I believed I would be treated decently it was in Montana -- where I had resided for 30 years. However, I was wrong.

During that 100-degree day in July 2006, there was a four-door car approaching me as I was running. Inside were young guys and they had their windows rolled down. As they slowly approached me, two guys (one in the front passenger seat and one in the back) leaned their heads out of the windows and spit chewing tobacco all over me -- covering my white singlet shirt, my bare arms, and even on my face. They laughed as the driver sped away. I had to change my shirt and use my water bottles to rinse off my arms and the right side of my face.

The incident took the wind out of my sails, and I was only 23 percent done with the run across the country. I remember standing there, rinsing and wiping myself off, wondering if what I was doing was really worth it. That one moment made my legs feel like lead and I truly didn't want to take another step. After several minutes, I started thinking about my youngest daughter -- Ashlin -- and her classmates, to whom I had made my promise to run across America. Quitting would equate to failing to keep my promise. So, I took a step forward, and then another... and eventually broke into a running stride again. Ashlin is now 25 years old and her classmates and she were only about 11 years old when I did that run. They really don't know the extent of the pain, emotions, mistreatment and more that I had to endure to keep that promise to them.

Being spit upon is such a disgraceful experience. In Matthew 26:67 we read that people spat in the face of Jesus. I'm certainly not in the same category as Jesus Christ (not even close!), but I do have experiences of having people spit in my face and the incredible emotional impact that results from such a degrading moment. In a way, such an experience can truly change a person.

Spitting upon another person -- especially onto the face -- is a global sign of anger, hatred, disrespect or contempt. Spitting in someone's face is considered one of the worst things you can do. It's obviously a form of violence, very confrontational, perhaps the most violent you can be against someone without actually hitting them. In most cases, spitting at a person deliberately will constitute an offense of assault. Sadly, I'll never forget the times that I was spit on.