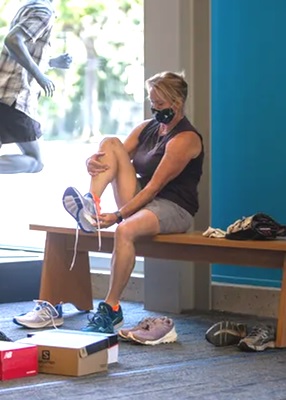 A study of 14,000 regular exercisers across 12 countries conducted by Asics found that 78 percent of runners say that being active during the Coronavirus pandemic has made them feel more 'in control', while 82 percent said running plays a key role in helping them 'clear their mind'. Those people are not only running, but also buying.

During the pandemic's onslaught this past spring (with people stuck at home and gyms closed), fitness enthusiasts turned to sports such as running and biking, both of which have seen a spike in interest. Stationary bike sales were up 101 percent through May and treadmill sales increased 68 percent. Popularity of fitness apps has also increased. For instance, Asics' data shows that its Runkeeper app -- which lets people track their runs and progress -- has seen a 252 percent year-on-year increase in sign-ups.

During a recent webinar for the Sports and Fitness Industry Association, it was said that while online sales of fashion apparel were flat through May as a result of COVID-19, active apparel was up 19 percent. The same trend was evident in footwear where fashion styles were down 11 percent while athletic footwear sales rose 25 percent. Among the brands that have performed best are Brooks -- which showed a net gain through May -- along with Hoka One One, which had a very strong spring. Under Armour has also been showing strength in its footwear sales. Many athletic shoe retailers are reporting that nearly half of all running shoe sales have been to new runners or walkers.

Although there has been an increase in interest by people to join the ranks of runners and bicyclists, there has also been an increase in injuries. Physical therapists are reporting that more people are calling with complaints of injuries after taking up running and cycling as the pandemic has impacted the world. For those not accustomed to regular physical exercise, pounding the pavement or overextending oneself can certainly present the possibility of injury.